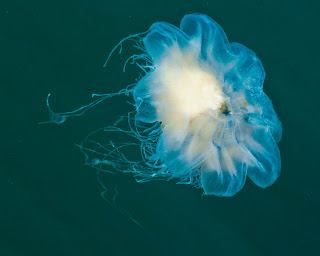 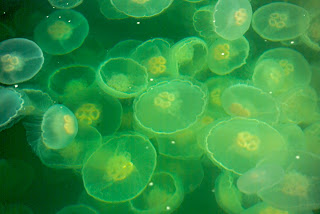 These intriguing, ethereal sea creatures are seen everywhere. Pulsing, drifting, seemingly floating, suspended, tendril-trailing organisms move singly or in organized masses that can be tiny globules or giant colonies. They might be white, cream, chartreuse, terra cotta or salmon in color; intriguingly beautiful or mud ugly. A recent truth is that jellyfish are best viewed from a distance and never from the inside of the engine room. 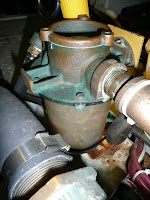 One night in Kalinin Bay, after an evening of company, the generator shut itself down... it just quit. Okay, it's supposed to do that when it overheats, but WHY would it overheat? Apparently a ten-gallon jellyfish tried to explore the generator water intake. Most of it arrived in the two-quart sea strainer as jellyfish slime. A large mass jammed into a small space was NOT a good thing.

Step 1. Capt. Sleuth quickly located the problem and set to work trying to remove the metal strainer from its glass jar holder. (The newly-sharpened edge on a favorite filleting knife was sacrificed to release the suction holding the strainer in place.)
Step 2. Rubber gloved up to the elbows, I poured jellyfish goo into a bucket and scrubbed the seive-like sea strainer with a stiff brush... and scrubbed... and scrubbed.
Step 3. Reassemble the strainer assembly.
Step 4. Restart the generator and monitor the temperature. Shut down manually if the temp skyrockets.
Repeat steps 1, 2, 3 and 4 above.
Repeat steps 1, 2, 3 and 4 above... you get the idea.
Finally, at 11:00 pm run the generator to partially charge the boat batteries while trying to stay awake and alert, and pretend your neighbors don't hear a thing.
Oh yes, jellyfish are best viewed from a distance.

Posted by SeattleDee at 8:02 AM No comments: 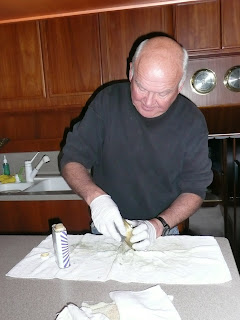 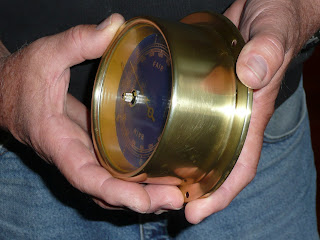 It was too wet, too windy, too rough and too cold to head outside to go fishing, or hiking or dock walking... and that's unusual. A boat beautification project beckoned - well no, that was actually step three.

* First came the assessment that the brass instruments in the pilothouse were ugly, heavily tarnished, probably beyond recovery.
* Next was the price check in the West Marine catalog for replacement items of equivalent size and quality. Oh, my!
* THEN came the Brasso and elbow grease episode. The three pieces now look suitably spiffy, sporting a patina of experienced service instead of the tarnish of neglect.

Posted by SeattleDee at 7:41 AM No comments: