It was just getting light as we left the harbor. Jericho cast off as well but there wasn’t another sign of life at the moorage. One truck rumbled by on the road above the harbor; maybe someone works an early shift at the fish farm/hatchery or in the cookhouse. We had such a good time at the five-boat crab and appetizer potluck last night that it was hard to wind down and turn in early. The heavy rain pounding on hatches and cabin top also kept me awake, like too loud music from a noisy neighbor.

Rescue Bay/Jackson Passage was the target destination, but we arrived much too early in the day to stop cruising. The excellent conditions invited us to continue on Bottleneck Inlet instead.

Picture a glass bottle with a narrow neck and a thick lip. That thick lip is a ledge, restricting entry and exit at low tides (10 feet at a zero tide). The neck is a slot between evergreen-coated bluffs and the body is a squiggly length of narrow bay with a view to snowy peaks beyond. This is a snug, stormproof anchorage - and the sunshine and abundant bird life made it especially lovely today.

May 7, Thurs Lawson Harbor
Route planning for today considered exiting the inlet, a desire for slack current at Heikish Narrows (10 mi beyond Bottleneck) and a positive current push during the day. We exited the inlet with great caution and little margin under the keel. Heikish was full of whirlpools and eddies but no drift and slowed us to 7 knots at one point. SOG (speed over ground) was up and down the rest of the day as currents pushed and pulled us along.

This section of the trip is lovely with a series of channels bordered by tree-lined, snowcapped peaks, with heights around 3100 and 4000 feet. Waterfalls poured out of steeply carved valleys on both sides of the channels, ranging from wispy, veil falls funneling snow melt runoff to rushing torrents of water cascading out of hidden lakes. It’s just one photo op after another.

A few fully branched trees floated past and I really appreciated the navigation assistance of those numerous gulls perching on the occasional log or chunk of drift. A soldier-straight lineup of gulls makes a low-floating log much easier to spot. 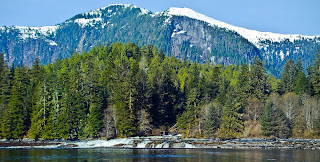 We paused at Butedale to shoot some photos and record current conditions for comparison with our images from 2000. Most of the old site is in ruins and weathering, vandalism and gravity continue the destruction. 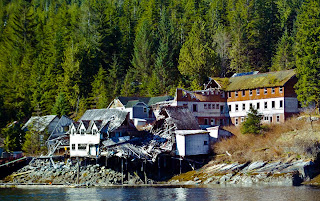 Grenville Channel has four good anchorages, each with some feature to recommend it. But we kept on going, entering the Grenville near the end of a flood tide and hoping to pick up a push from the ebb in the middle where the tides meet.

So where’s that favorable push? We bucked 2 to 3 knot unfavorable currents where we should have picked up that much speed. Sigh! Today’s cruise stretched on a bit longer and slower until we finally anchored in Kelp Passage/Lawson Harbor, a few miles south of Prince Rupert.


The Dixon Entrance crossing into Alaska was remarkably smooth - no challenge this year. We made such good time we decided tomotor on past Foggy Bay (our usual anchorage) and continue on to Ketchikan. Just before we made the turn into Tongass Channel two huge humpback whales breached and threw up a tremendous splash. Several whales continued to blow and show as they circled the area. “Welcome to Alaska!” Whales, sunshine, calm weather and room at the dock - what could be better. We’ll celebrate with a traditional arrival dinner of Mexican food at Oceanview Restaurant and the luxury of sleeping in tomorrow.
The next few weeks we will travel north along the west side of Prince of Wales Island and explore the westerly and outside route. The fishing and wildlife viewing sounds good, and some of this will be new territory for us. There won't be cellphone or internet coverage until we stop in Craig, and then it will be a treat to get back in touch the rest of the world.
Posted by SeattleDee at 4:30 PM No comments: 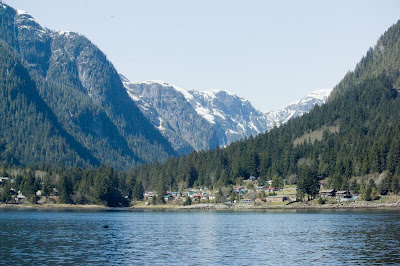 What is it that makes Ocean Falls unique? It seems a quiet battlefield of crumbling old structures, whispering of more active and prosperous times in contrast with nature’s ongoing forces of change.
The dam at Ocean Falls still provides power to the communities of OF, Martin Valley, Shearwater and Bella Bella where once it supplied the needs of a large paper mill complex. Bare foundations and rock walls, empty skeletons of houses, dormitories, mill buildings, and a broken section of an Olympic-sized swimming pool litter the area, all reminders of the 5500 people who once lived and worked here. The old hotel once boasted of being the largest hotel north of San Francisco. The post office is still active, as are the marine ways, but most of the sparse population lives a few miles down the road in Martin Valley. Weekly car ferry service and a weekly supply barge from Shearwater connect Ocean Falls with the outside world, and summers bring a stream of cruising boaters. 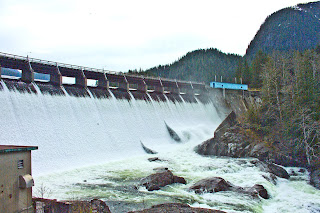 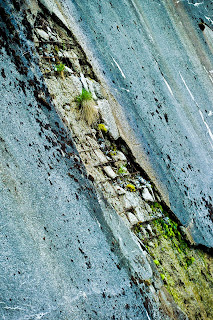 Man’s imprint is slowly disappearing and being overrun by nature. Nature on the other hand is quite exuberant in Spring. Green shoots emerge from the cracks and fissures in the dam face. Blackberries, lupine, daffodils, and the remnants of old gardens blossom with enthusiastic vigor. Forsythia, quince and cherry add decorative sprinkles of color around the old community.

Posted by SeattleDee at 5:58 AM No comments:

Labels: at the dock, Ocean Falls

April 29, Wed Otter Cove/Chatham Pt
We’re right on schedule for departure if we use past trips for reference. But since we hoped to leave early it feels frustratingly late. I took us out of the harbor (with a bit of coaching) while the Capt handled lines and bumpers. We transited Seymour narrows at slack current in the mixed company of nine fishing boats, pleasure craft and one tug and barge. What a joy to head out in full-blown spring sunshine and light variable winds.

Systems check revealed the new salon Espar heater would not fire. We anchored in Otter Cove at Chatham Point to troubleshoot the problem. After some hose clamp tightening, fiddling, trial runs and the like, the unit functioned properly. We’ll stay put overnight and recheck the heater early Thursday a.m.

Hooray! The Espar performed beautifully at 0500 and we now have a warmly comfortable cabin for the run west out Johnstone Strait. With a current push most of the day our speed over ground should be good (good is anything more than 9 knots).
Jerry and Tanya (M/V Jericho) were still at Lagoon Cove so weplanned to meet enroute to Blunden Harbor, ready to round Cape Caution early on Friday. Four dolphin cavorted in Johnstone Strait east of the Havannah Channel intersection - it must be a good luck omen. 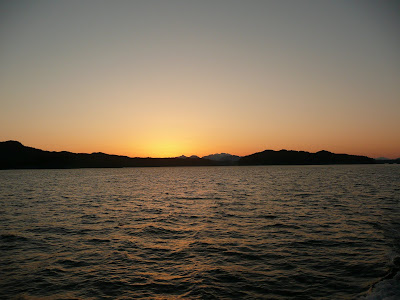 0400 weather report indicated terrific conditions today so we fired up at dawn and set out to round Cape Caution. I checked out the east arm of Miles but the Capt pointed out our course was elsewhere. OOPS! my bad.

What a good cruising morning with light variable winds and low chop on almost no swell. This could be a very comfortable crossing and well worth the super-early alarm clock call. Outflow winds and current off Rivers Inlet popped up some whitecaps and put spray on the windows. The drifts of yellow pollen wanted to stick and smear so additional spray will almost be welcome.

A visit with Sally the Wharfinger is one of the reasons to travel up Cousins Inlet to Ocean Falls… that and the crab. But Wharfinger Sally Isaksen and husband Joe are moving soon so Tanya organized the traditional first-crab-of-the-cruise crabfeed and a farewell party in the dock’s party room. The crab were huge and plentiful. Males well over the legal size were tossed back and only the really big boys made the cut. Large chunks of sweet, succulent crabmeat were savored and initially slowed all conversation to a series of appreciative moans.

Gusting outflow winds (33 kts, 41 kts...), deteriorating weather, good company and easy crabbing will keep us in Ocean Falls for a while. (Mainly the weather kept us at the dock for 5 days. Hurricane force winds were reported offshore and we recorded 40+ knot gusts in the harbor.) More crab, more hikes, more socializing... it's all good.

Posted by SeattleDee at 11:05 AM No comments: