Excerpts from my cruising journal...

Awoke to rain, then fog. Miles of closely-packed swells on the 30-mile run down South Chatham Sound made for an uncomfortable ride. WOW! A humpback whale led us into the final 1/3 of the Red Bluff entry passage, continuously blowing, finning and feeding close to the surface. His course was a bit erratic - always exciting when you share space with a whale in a narrow channel!


The bay was empty, so we tucked into our favorite spot in a snug little cove with a view up the river and across the wide estuary.

1 grizzly wandered the meadow as we arrived, next came a sow with 2 cubs, followed by a second sow with 3 cubs. What an amazing wildlife day – and its still afternoon. By late evening we had tallied up 5 to 7 adult bear and 5 cubs. Most of the grizzlies wandered in the estuary meadow, grazing on the lush grasses. One lone bear ambled along the shore at high tide, passing about 100+ feet off our stern as he searched for ripe berries.

The next morning at breakfast that same lone bear headed back in our direction, long before he could smell the sizzling bacon and sourdough waffles cooking in our galley. Blue sky, snow-capped mountains, more waterfalls than we could count, bear and birds all over the place – can it get much better than this?!

Two other cruising boats had joined us in Red Bluff late in the evening, and two large charter boats brought their guests in late in the morning. Only 2 grizzlies roamed the meadow at low tide, but the bay itself was dotted with colorful kayaks, rubber inflatables and several dinghies. Everyone loves Red Bluff, especially when the sun is out and there are grizzlies to watch. We have visited 8 times in our 13 years of cruising SE Alaska, typically staying 3 or 4 days. I’m certain we’ll be back again and again.

Dee kayaked along the shore, following the lone male as he strolled by on Day 2. Ron photographed Dee and the bear. On Day 3 we ran the skiff up to the estuary at high tide to photograph the sow with 3 cubs and our now-familiar scruffy, lone bear. Later in the evening two young males entertained us for 10-20 minutes, sparring in mock battles and chasing each other across the meadow, then settled back to hang out quietly in the same area. Teenage boys of any species like to roughhouse….

On Day 4 (early evening, high tide) we both kayaked along the shoreline up to the mouth of a secondary stream, arriving just as two grizzlies raced in our direction, running away from something at the far end of the estuary. Grizzlies swim slowly and run very, very fast! Exciting? Yes, but what an amazing photo op as this pair stopped directly ahead of us and settled down to graze along the shoreline. We floated, barely drifting and sitting absolutely still, about 200 feet offshore and shot over 600 hundred images. Here are a few shots from that special "Kodak moment".

Update in 2013: we now have a slide show to share on the computer!

We cruise past every year, stopping to anchor in nearby bays but never pausing here. The bay is deep, it can be crazy crowded during a seine fishing opening; and those are just two of the excuses we’ve used to to keep moving. Then we met some of the Hidden Falls crew while we were at Warm Springs and they invited us to drop by for a visit and tour. The invitation overrode any excuses… and that’s a good thing.

We had a terrific time on Ben's guided tour, chatted with several of the “fish people” about their work, and later visited with other residents. We enjoyed our time with this friendly group ...and then there were the grizzlies.

Two youngsters semi-successfully caught salmon in the river, a mom and cub appeared and disappeared in between their meals, another grizzly strolled nonchalantly down the boat ramp and turned up a path past the houses… and on it went all day. Oh yes, there were bear; they knew a good spot to dine.


While this Hidden Falls fisherman did actually hook a chinook salmon from his perch high up the ladder, the bears were considerably more successful! (I couldn't resist adding this photo - it seems the extra height makes it easier to spot the fish and cast into a promising spot)

Posted by SeattleDee at 6:54 AM No comments:

This year we saw the tops of the surrounding peaks before low clouds and rain rolled in to hide them again. Years of visits to Takatz merge into one colorful filmstrip in my mind. For example…

One year The Capt ran the skiff up to a tall bank at high tide so I could pick huckleberries from the water side of the overhanging bushes. I stood on the bow of the dinghy to harvest on my side, while some large unseen critter tromped noisily around the uphill side of the same berry patch. A bear? I thought so. Afterwards the skiff was a mess, thoroughly littered with twigs and leaves and its formerly white interior stained huckleberry-blue, but I had a generous quart of berries. Imagine my surprise when I tossed the fruit into a pan of water and little green worms wiggled out of some of those berries! Ugh. Of course we ate the berries… after I skimmed the worms off the water. That was the first and last time I was encouraged to pick berries from the dinghy; oh, the skiff cleanup took ages. I have found some other locations where the kayak works for berry picking, but it has never been as interesting as here in Takatz.

Posted by SeattleDee at 6:29 AM No comments:


...some seine boats hang out at Baranof Warm Springs. 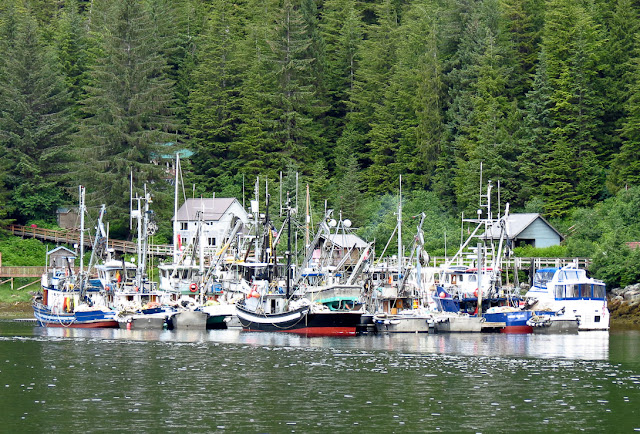 Here's the sight that greeted us as we arrived at 0730, a dock packed full of boats that were rafted 3 and 4 deep. No room for us this early, so we anchored across the bay. 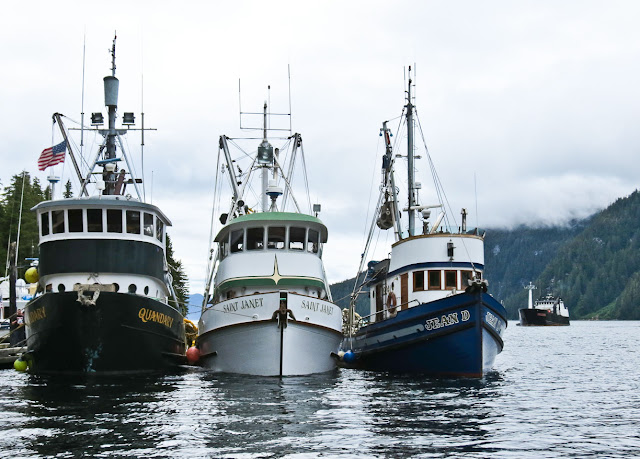 Shortly after we anchored, a few seine boats began to leave. We raised our anchor in record time and moved over to the dock.

Baranof is a popular spot with working boats and cruisers alike. While fishermen are here at the dock or on anchor, they can enjoy the hot pools at the top of the waterfall, fish in the lake, soak in the shoreside  tubs, or work on boats and equipment.

Although some boats left in the morning, several others remained to finish essential projects. There was some heavy net repair work going on. A whale (more than one??) had cruised through a deployed net, causing major damage. The torn net had to be recut, reshaped, whipped together and rewoven to salvage a workable solution for the next day's salmon opening.

Labels: Alaska, at the dock


At 5:00 a.m. scores of seiners dotted the water in mid Chatham Strait for a one-day salmon opening. There were upwards of 80 seine boats vying for their share of the chum salmon returning to the Hidden Falls hatchery. We ran over from Ell Cove in our skiff and spent several hours following a number of boats through multiple cycles as they set and recovered their nets. Old boats, remodeled old boats, and newer boats all jockeyed for position and worked nonstop from the opening to the 10:00 p.m. closing. It was fascinating to watch, and led to a new appreciation of the skill and energy involved.
Here are a few shots from the day 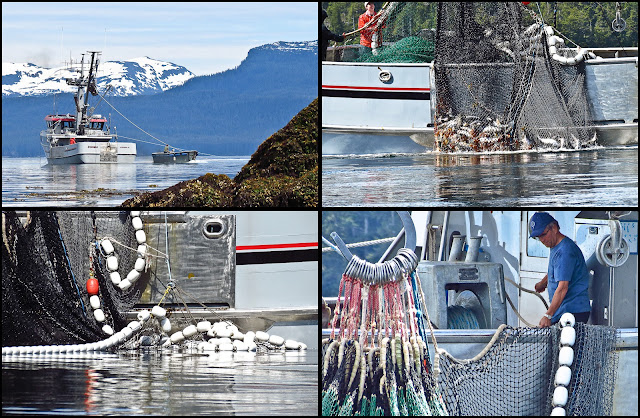 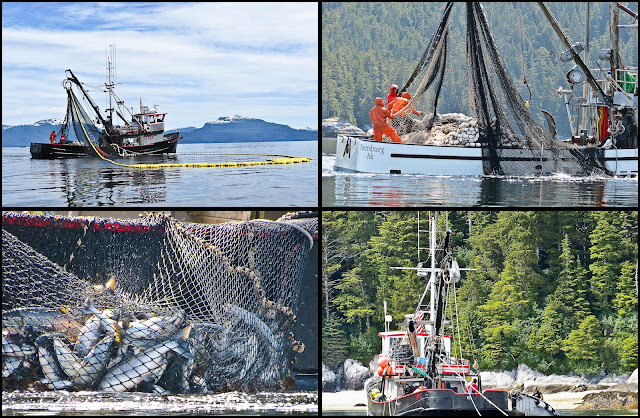 This was a warm, sunny day in calm water. Now imagine fishing in cold, stormy weather with challenging sea conditions.

Posted by SeattleDee at 1:38 AM No comments:


At 0600 we viewed the world in varying shades of gray: pale gray, dark gray, steel gray, blue gray, even the snowfields on Baranof Island looked an icy white blue/gray. Fog and low clouds will do that, absorbing or obscuring color, draping a gauzy gray fabric over the landscape. That changed when we entered Ell Cove, the clouds moved on and sunshine changed the palette.

Ell Cove is a snug little anchorage, barely big enough for a handful of boats, a space where you cannot see or feel the choppy water of Chatham Strait outside. The sun's warmth brought out the scent of the surrounding evergreen forest, a smell reminiscent of camping in the mountains instead of anchoring in saltwater.


Whales! More whales! Everywhere we looked in Frederick Sound the water was speckled with humpback whales, spouting, finning, leaping or breaching. They popped up continually along the route, typically in the distance, just beyond the reach of even our longest lens. We tallied 17 separate whale sightings, give or take a few, and only one whale approached us. That lone humpback surfaced suddenly off the port bow traveling parallel to our course - where did he come from?!  The Capt. pulled back the throttles as the whale abruptly turned across the bow and dove, disappearing beneath the surface, leaving very few telltale ripples in his wake. What an adrenaline rush, I didn't need binoculars to watch that whale!

Chapin Bay is an oft-visited stop in Frederick Sound, a 7-hour run from Petersburg on the route to Baranof Island’s eastern shore. This enclosed bay offers good protection in almost all weather, the best in this section of Frederick Sound. Chapin is a beautiful spot, enclosed by snow-dotted peaks with a wide river estuary at one end. It’s close to good areas to crab, catch halibut and salmon, watch whales, or just sit at anchor and watch eagles, the occasional bear and even more occasional whale inside the bay.

The week’s low clouds, torrential rain and morning fog cloaked most of its scenic beauty, but the protection inside was outstanding. We sat comfortably inside Chapin's barely rippled water while 35-knot winds whipped up 6-foot waves outside in Frederick Sound. We didn't fish much (I'm such a flat-water fisherman!)

Posted by SeattleDee at 9:59 AM No comments:


Scores of eagles hang out around a fishing harbor, ever alert to an easy meal whether it be a herring swimming too close to the surface, an unwary duckling or small pet, scraps tossed away from a boat or the fish cleaning stations, whatever.  These large birds perch high up in unlikely places, scanning the water with an "eagle eye", ready to swoop down and grab an easy snack. How do they keep balanced atop sailboat masts, trolling poles or stabilizers while they wait?

Yesterday, after the departure of the seine fleet, the near-empty harbor seemed unusually quiet. Only an occasional raucous cry of a seagull or cackle from a seagull pierced the air, until.....


A large eagle flew past at boat level, followed by an entire eagle squadron in screaming hot pursuit. They wove in and out among the masts and piling, over a dozen of those big guys eager to snatch a herring from the beak of the group leader. No tight formation for this group, they twisted and turned in complete disarray as it was every bird for itself. And then they were gone. Out of sight past South Harbor, heading toward the ferry dock, their shrill squawks faded away and the harbor returned to a quiet state.

Typically it's the ravens task to harass an eagle, hoping to catch a dropped morsel. Not today. Today the ravens settled for raiding the unattended buckets of Petersburg herring left by unwary fishermen. Well, I don't think I'd mess with a squadron of eagles either.

Everybody Loves a Parade 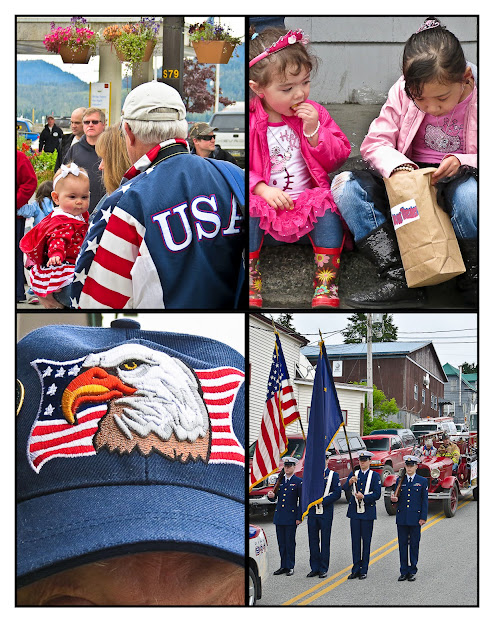 Posted by SeattleDee at 11:38 PM No comments: