And I thought 2009 was going to be the Year of the Whale. Bear sightings had been few and far between this year - almost non-existent when guests were aboard. Where were the bear? We found them in Pavlof Harbor on Chichagof Island in August.

Pavlof is one of the more scenic anchorages in SE Alaska. We usually anchor in front of a small waterfall with its adjacent fish ladder. The steep-sided valley behind the falls is flanked by towering snow-capped peaks and holds a good-sized lake fed by Pavlof River. Several salmon species return to spawn in the streams above the falls and this month the water is teeming with fish. King salmon loiter just outside Pavlof in greater Freshwater Bay, on their journey to larger rivers. Inside the harbor dark clouds of schooling pinks ripple the water’s surface as they dart about, waiting for high tide to tackle the climb up falls or fish ladder on their way to the spawning grounds. Occasional coho leap skyward in silvery arcs and nose back down again to disappear quietly beneath the surface. Pinks noisily jump and flop back down on their sides or cavort in repeated surface jumps like skipping stones. Dolly Varden mass below the falls, swirling about in the shallow water, perhaps gathering to feast on the salmon eggs that wash downstream. Sockeye will return here too, later in the month.

We like to dinghy in close to the base of the falls and drop a small anchor to hold us in midstream in the current, just off of the shallows. We spin cast for Dolly Varden or coho, or just sit and wait hopefully for a bear to appear. Years ago we would pull the dinghy up on shore and spin cast from the bank, but it’s hard to concentrate on fishing when a bear is working the same side of the stream! Now we stay in the boat.

On the first day we were entertained by a young grizzly who was indecisive about where to fish - along the bank, at the fish ladder, in the falls, or in the several small pools scattered throughout the shallows. While aware of us, he kept a comfortable distance. Aware of him, we liked this comfortable distance, even as we mentally rehearsed the fast up-anchor and motor-out-of-here drill. Be prepared, just in case. 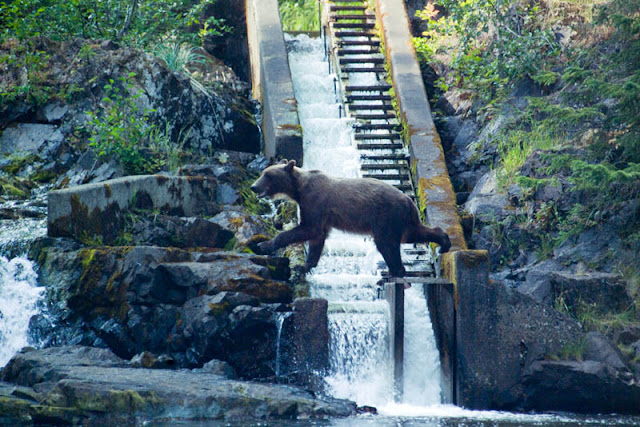 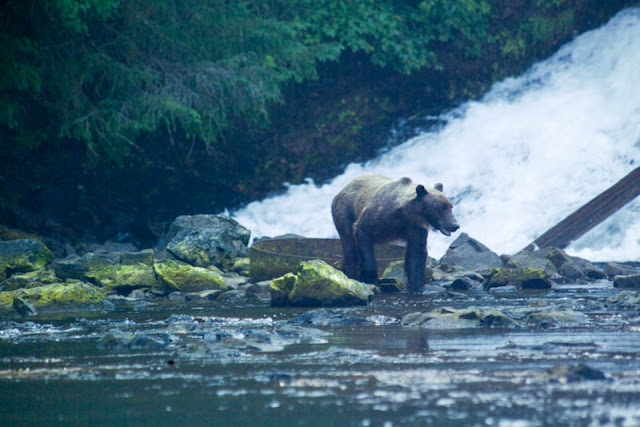 The next afternoon we had just anchored in the same spot at high tide when Capt Ron remarked “Keep watching the bushes behind us. That’s where the bear trail comes out.” He began spin casting and I looked up to see two cubs wander down the bank to the water’s edge. Where was mama bear?! We didn’t want to be between her and the cubs! Finally Ron spotted the sow as she remained in the shadows just outside the bushes above the bank. Omigosh! Grab the camera and enjoy the antics of this trio as mama grizzly fished to feed her family. Neither cub liked to get wet so they climbed and clambered over rocks, logs and fish ladder walls to get to their meal. One cub was more adventuresome than the other, wandering farther away and then romping back to catch up. These grizzlies were an unusually light color, a blonde/beige mix that absorbed the low rays of the afternoon sun and shot off a glistening halo. Hollywood special effects couldn't have done it better. 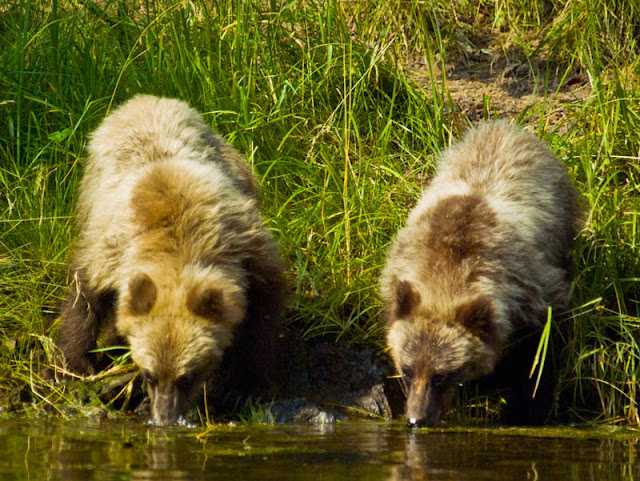 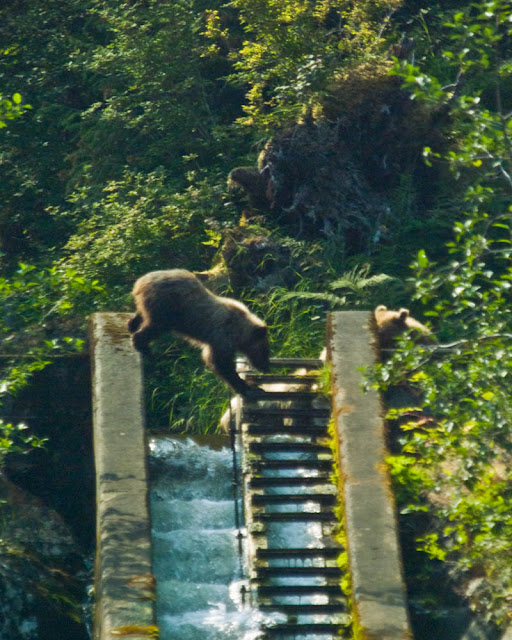 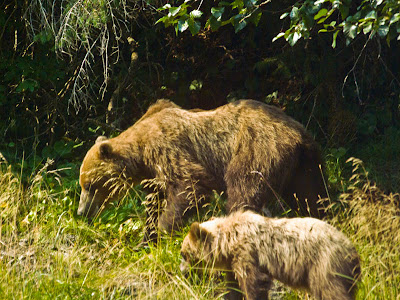 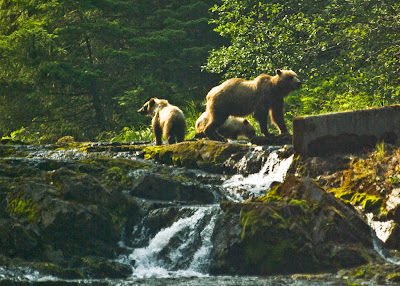 On day three the young grizzly returned to fish again, crossing the shallows and wandering from bank to bank. He appeared to be nervous and wandered off into the brush above the fish ladder just before the family of three appeared on the opposite bank. Clearly these grizzlies don’t socialize and dine together.
We spent four days anchored in Pavlof Harbor and trolled for salmon, ate a lot of salmon, spin cast for Dolly Varden, visited with friends and did some dinghy explorations and photography... 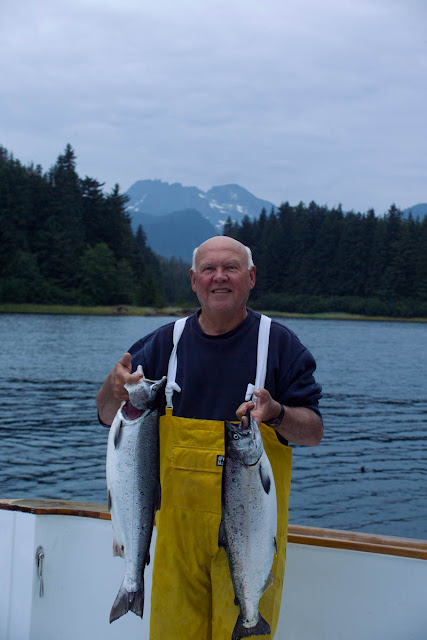 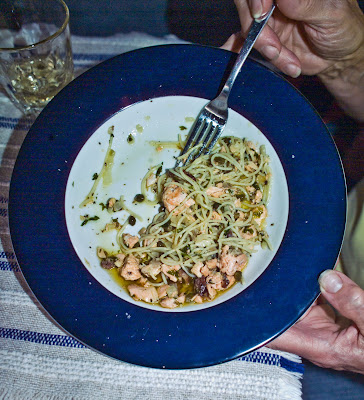 … but it was really all about the bear watching. 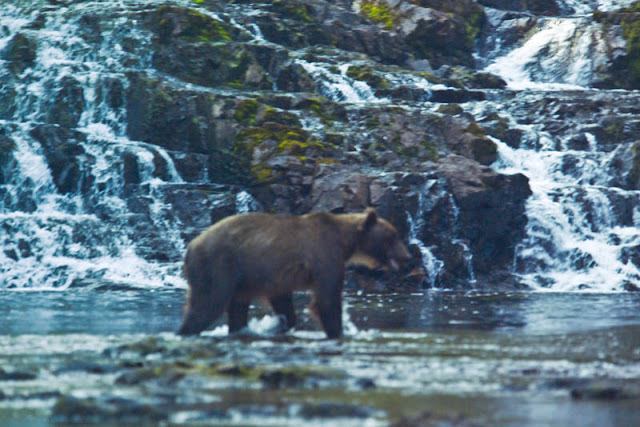