Fishing Action at the Dock

The fish cleaning station on neighboring F-dock has hosted occasional activity during the past week. While not as busy as it will be during the peak salmon run season, we have seen some nice sized fish arrive, one or two per day. Seals and sea gulls instantly appear at the same time, ready to snap up the discarded bits. Do they have scouts that keep watch and sound an alarm?!

Unexpectedly a large loon showed off his fishing skills as he cruised along our fairway, disappearing for long minutes before surfacing with a big-for-him little fish. Loons typically keep their distance from the boat, almost as if they know the reach of my camera lens. This bird was all about fishing, disregarding proximity to people and vessels alike. He dove and surfaced repeatedly, following wherever the small fish traveled, occasionally popping into camera range just long enough for me to grab a shot. 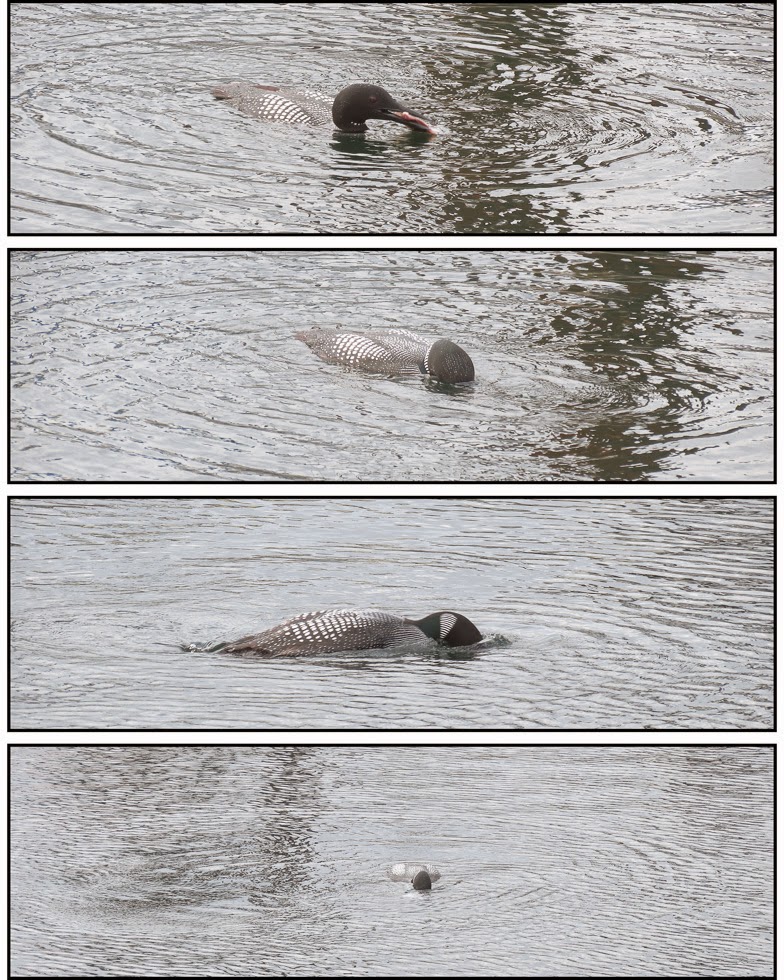 This afternoon a local boat returned with seven fishermen, an empty case or two of beer and two very heavy fish coolers. How heavy? it took two men to carry each one. The biggest cooler was lifted into a dock cart and rolled ashore. I wonder what it held. The second cooler, carted over to the cleaning station, produced 13 large Dungeness crab. It took mere minutes after the first crab was cleaned for a seal and a swirl of seagulls to arrive. Who set off the first alert?

Posted by SeattleDee at 4:26 PM No comments: 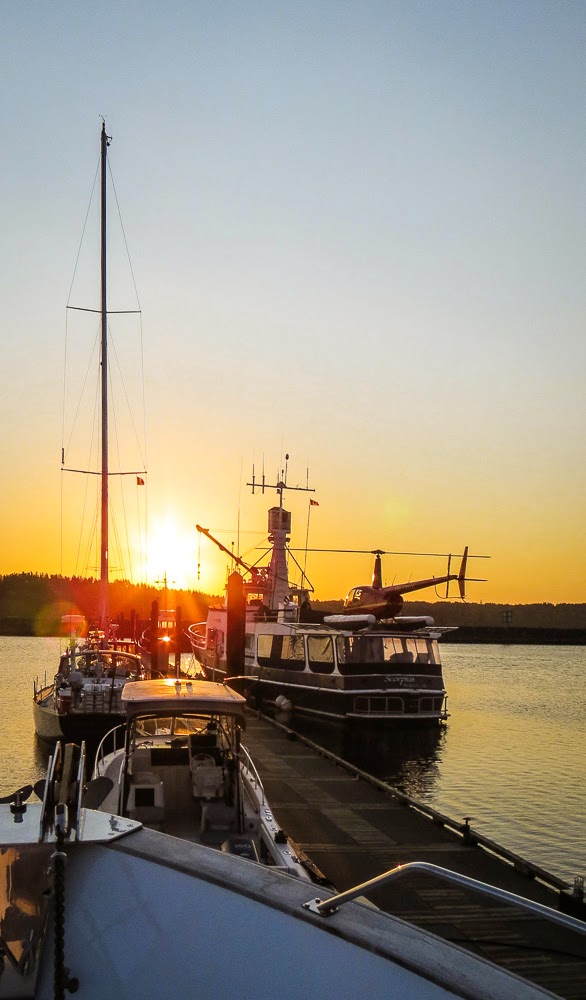 Was it a bird... a drone... a floatplane... an early-morning crew boat? Nothing was visible through the hatch overhead, but something close by was sending noisy vibrations through the air. What did cause the noise that sent us racing up to the pilothouse early this morning? Oh! My! Goodness! It was a small helicopter, landing on the large boat across the dock. Now that was a sight worthy of leaping out of bed just after dawn. 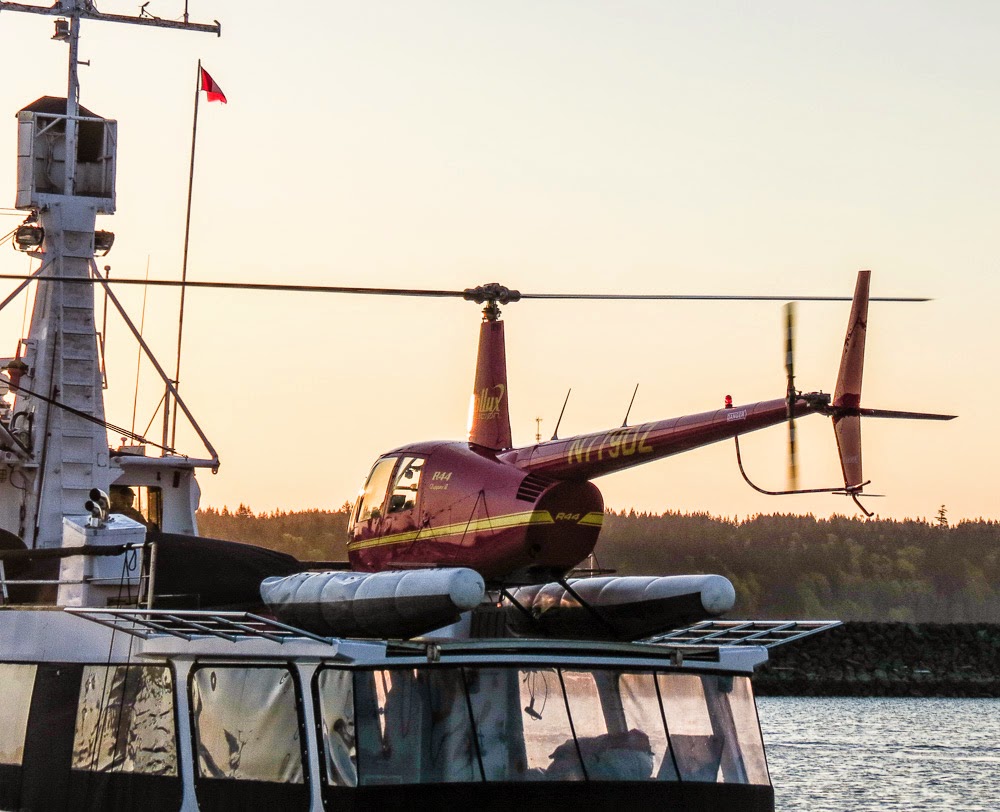 The tide was up, the sun was up (barely) and the wind was down; a perfect time to land I suppose, if there ever is a good time to land on such a small platform! M/V Scorpius is a large vessel, but she carries a tall tower, a crane and tons of antennae on her upper deck. That leaves just enough room for an experienced pilot to keep the rotors away from all of those obstacles when setting down. Larry is a good pilot; he's landed on Scorpius hundreds of times before, but I'm still wide-eyed at this feat. Now just imagine doing this in unsettled weather. 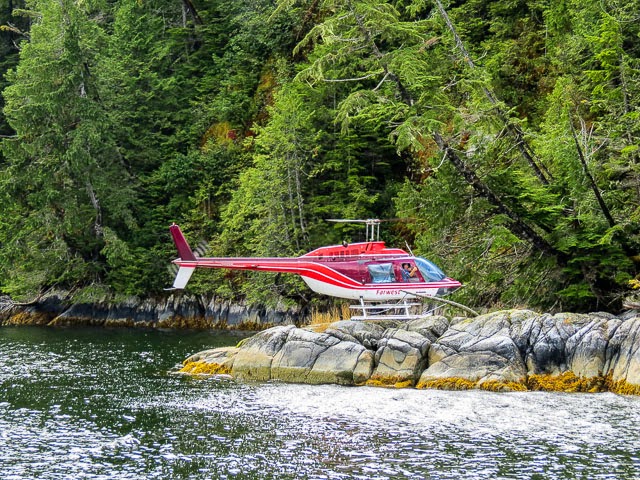 This morning's event reminded me of the small copter we had seen in 2013, perched atop a rock along the channel at the upper end of Smith Inlet. I still wonder "Why?"

I wonder what new surprises tomorrow will bring.

Posted by SeattleDee at 9:53 PM No comments: