Do you wake up bright-eyed and alert, organized and ready for action? I wish I had been all of that this morning. I slid out of bed and meandered slowly, without my contact lenses, up to the galley for the day’s first cup of coffee. A blur in my peripheral vision, motion close by, caught my attention. A small fin glided past, just outside the window, and disappeared underwater. Hmmm, a fin… wait, a fin?!  Then more fins sliced through the surface, followed by the sleek, rounded bodies of killer whales quietly blowing and cruising by out of the bay.

I hold a vivid picture in my memory of those few moments, but have no great photo image to share. The first click of my camera brought up a reminder that there was no card available to capture the image. Drat! I knew better than to leave the camera empty overnight with its card still inserted into the computer. I shouted for RL who leapt out of bed and, without stopping to put his contacts in, grabbed his big camera, raced on deck and shot blindly at the rippled surface ahead of the boat. What luck! his image shows the four departing orca. Ah, but you should see the closeup in my mind’s eye, an image of orca almost close enough to touch.

Posted by SeattleDee at 10:26 AM No comments:

Grizzly Bear with a Kayak

Day 34
Do grizzlies have a sense of humor?
Are bears naturally curious?
How smart is a grizzly bear?
How long is a bear’s memory?

These questions puzzled me during a recent stay in Kalinin Bay, a favorite anchorage on Kruzof Island, just 30 miles north of Sitka. Kalinin’s estuary holds the Sea Lion Cove trailhead, one end of a well-marked, well-maintained hiking trail that runs from inside the bay 2.5 miles up and over the ridge to a stunning crescent-shaped sand beach on the west side of the island. This scenic hike involves climbing up a steep, notched log ladder, scrambling up rocky hills, crossing boggy muskeg on slick boardwalks green with moss, strolling around a picturesque lake, and finally descending to the wide expanse of Sea Lion Cove. It’s a memorable trip, though a bit challenging for this city girl.

We’re accustomed to viewing several grizzlies grazing on tall grass in the Kalinin estuary, but have never encountered one close up on shore. That’s just fine with me, no close encounters necessary. Coming upon a pile of steaming fresh bear scat deposited on the trail’s boardwalk once was more than close enough. Our group of six made a lot of noise during that hike and any bear that might have been nearby kept its distance. We haven’t hiked the whole trail from end-to-end for ages, and it seems the experience has become more… well, interesting.

Kalinin lacks a dock or mooring buoys, so access to the trailhead is an issue. The shoreline is rocky and uneven, not at all boat friendly. Some hikers choose to have someone ferry them in by skiff, nosing carefully up to a large, flat rock to offload people and gear, then return hours later for pickup after the hike. Other hikers come ashore in lightweight skiffs, or paddle to shore in kayaks, dragging their crafts above the high tide line while they hike. One bear has shown a strong interest in beached kayaks and their stored gear. He seemed to claim territory over one kayak early in the morning, then ambled away to graze on tall grass. What’s with this kayaking bear?

Later the same afternoon members of a guided, multi-day kayak tour returned from their hike only to discover the bear grazing near the shore, positioned close to the path between them and their boats. The grizzly was reluctant to leave the area, perhaps attracted by the scent of humans or their provisions. The bear had been interested enough to tear up some life jackets and do some structural damage to at least one kayak. Unable to open a storage compartment, he pried part of the kayak’s top away from the hull. The kayakers leapt and shouted and threw rocks in his direction, but the bear wasn’t ready to leave. The Capt and my brother Mike fired up our skiff and raced over to assist if needed, but the bear slowly ambled off away on his own, grazing his way into tall grass farther up the estuary. The kayakers reported they had thrown rocks at the same bear to drive him off when they had arrived earlier in the day… hmmmmm, not a well-thought out plan it seems. I wonder how much sleep that group enjoyed as they camped out in tents on the other side of the bay. Their campfires blazed high late into the night. 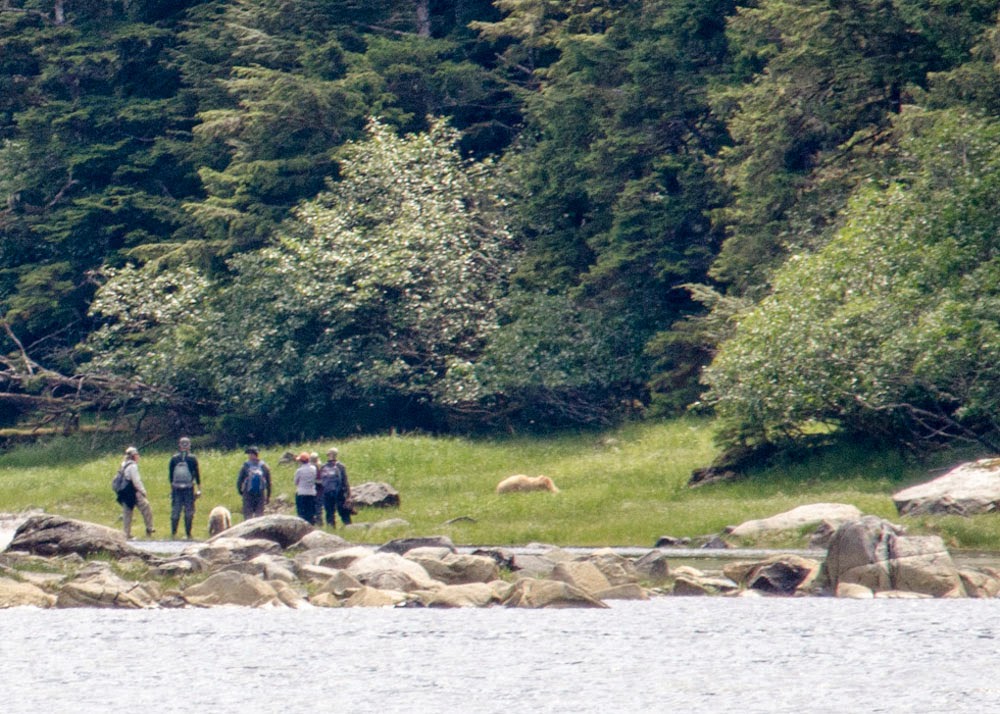 Late in the evening a third group of hikers arrived in two small aluminum boats. They unloaded some backpacks and surfboards, and then reeled their boats back out offshore on a 3-point anchor system. This energetic group seemed well-organized, locals perhaps who knew better than to leave boats, gear or even the scent of provisions on shore. While the unloading was in progress that same bear returned to graze in the same area adjacent to the hiking path. Both bear and hikers noted each other’s presence, each calmly continuing on with their own activities. Bear and humans moved separately up the estuary and soon the rocky shore was empty.  Maybe the kayak-loving bear doesn’t surf. 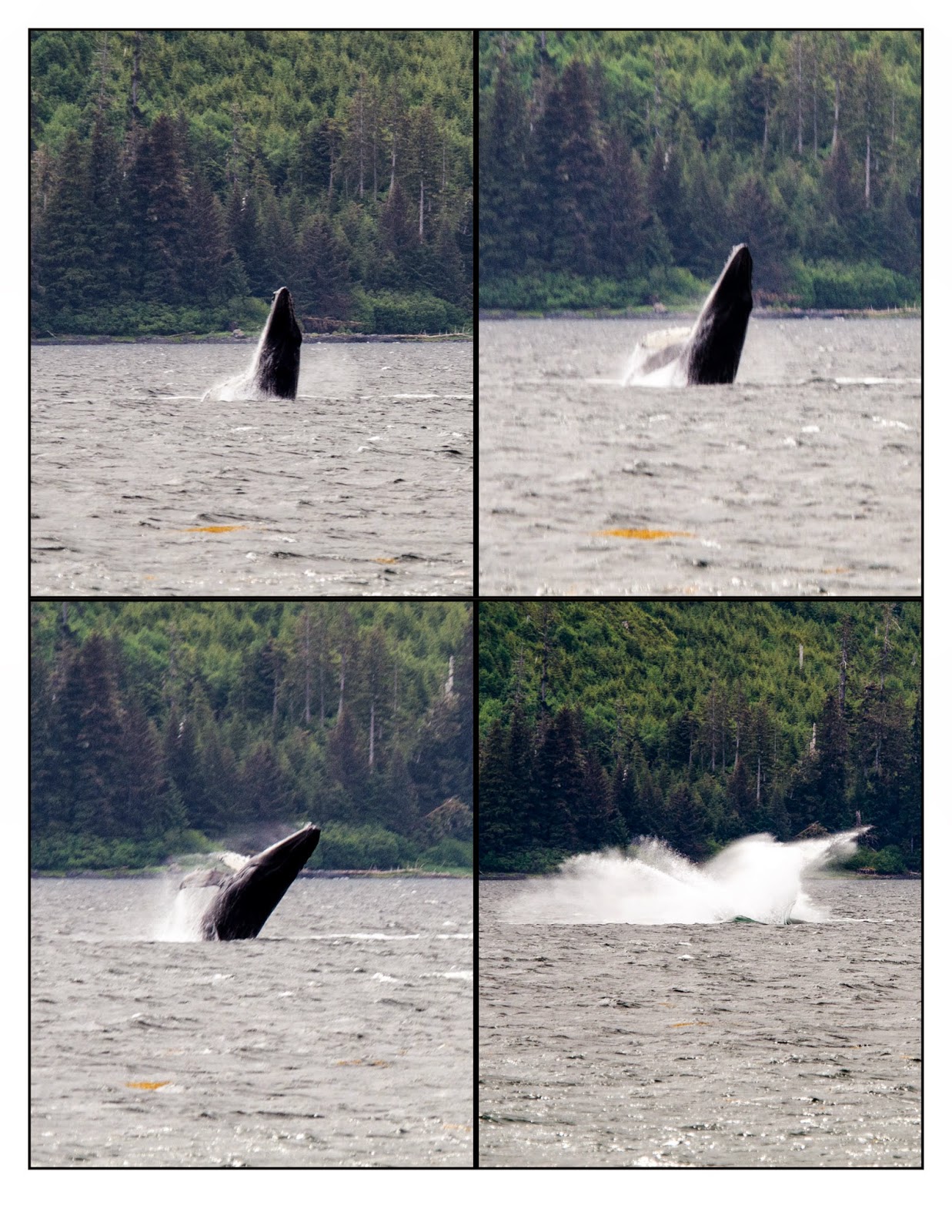 Petersburg to Chapin Bay
Day 26                         62.8 nm
Whale sightings in Frederick Sound were a sunny day bonus! We typically see at least one humpback whale hanging out near Portage Bay, or somewhere in the distance between Portage Bay and Cape Fanshaw across the channel. Today we spotted 5, maybe 6 whales, first hearing their blows and then spotting the puffs of vapor rising skyward. This group just cruised along, rolling on the surface and disappearing again for 10-15 minutes at a time. No fins or tails slapping, no leaps or displays, no big show, but that didn’t really matter. It’s always a treat just to see whales and Frederick Sound is a great place to observe them.

According to the Petersburg Marine Mammal Center:
·      *Of the estimated 22,000 whales in the North Pacific, approximately 3,000 to 5,000 spend the summer feeding in Southeast Alaska.
·      *Nearly half of the Southeast population enters the Frederick Sound area during the summer.

Other humpback whale factoids:
*Frederick Sound humpbacks have been tracked to Maui, Hawaii – a 2,800 mile migration. One whale identified in Alaska was spotted 39 days later in Hawaii.
*Humpbacks are baleen whales that have no teeth, but use plates of baleen on each side of the upper jaw to strain out feed. They eat krill, herring and other small schooling fish.(Imagine the quantity of fish it takes to feed a whale that’s over 40 feet long!)
*The ventral side of a humpback’s tail (fluke) has unique black and white markings, markings that are unique to each whale. Researchers and whale watchers can use these markings to identify individual whales. Hmmm, like snowflakes but on a much larger scale?! 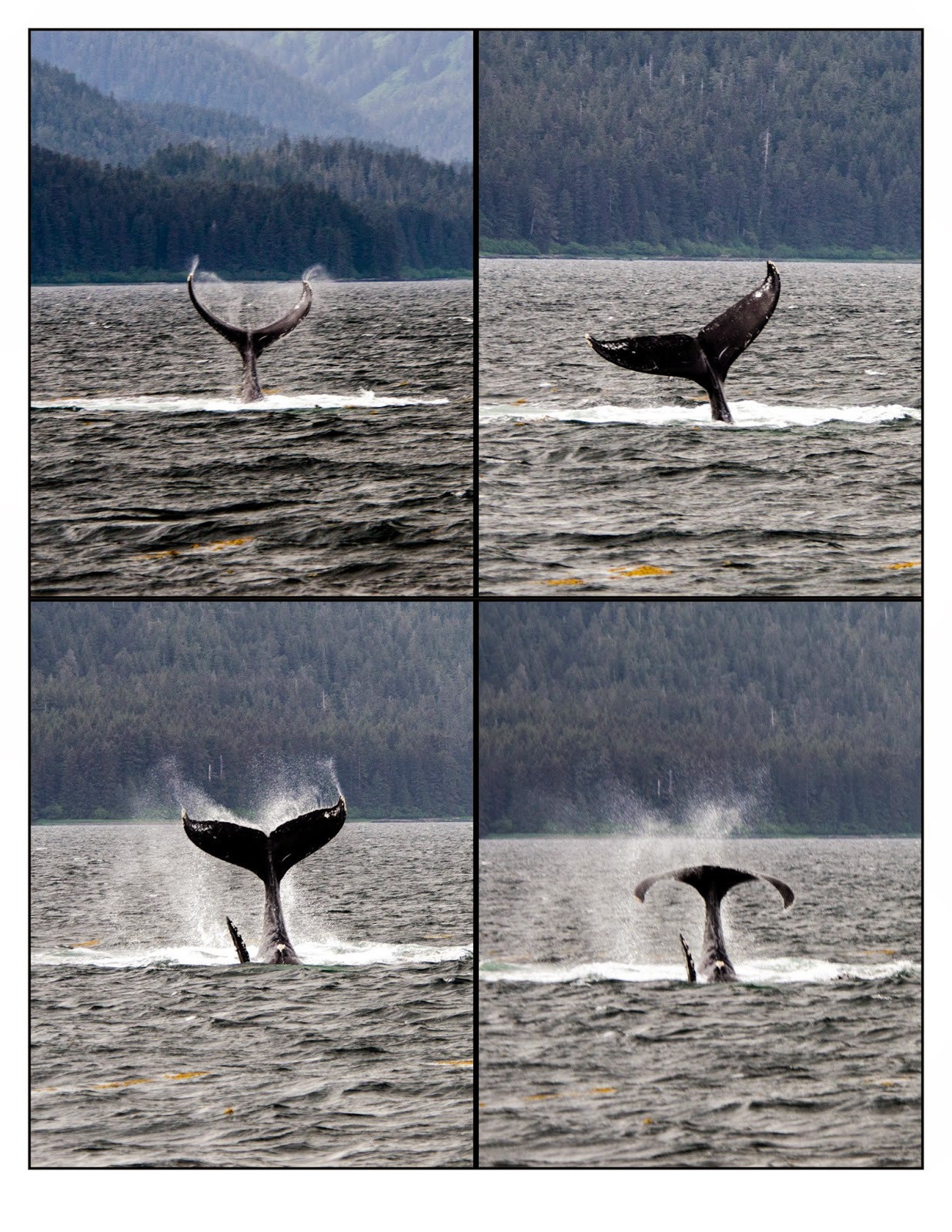 Chapin Bay to Baby Bear Bay
Day 27                         78 nm
Omigosh, more whales in sight, and this time they put on quite a show! We spotted seven whales in all, but two were real acrobats. They leapt and splashed, tail slapped, spyhopped, fin slapped, and breached, shooting skyward while twisting like a corkscrew only to crash back into the water, and then do it all over again. The show went on for ages, then abruptly stopped. We have some terrific photos, never enough of course, but these 2x2 composites are sufficient to trigger some great memories and bring a smile.

Come on by the next time we cross paths and check out our latest whale slideshow.

Posted by SeattleDee at 10:02 AM No comments:

Day 26
Was there a fishing derby going on in Frederick Sound? That’s what it looked like when we departed Petersburg’s North Harbor. We had the same impression on our first visit in 2000, when those bobbing white “boats” turned out to be chunks off icebergs that had calved off of the LeConte glacier. These chunks move slowly around the area, pushed about by wind and currents. Some bergs have deep bottoms and ground on rocks and islets, while others spread out to drift farther along the Sound. A few occasionally drift into Petersburg’s north harbor, necessitating some tugboat/pushboat action from the harbor crew in their sturdy skiffs. Most bergettes just travel along slowly, changing shape and location until they melt away. 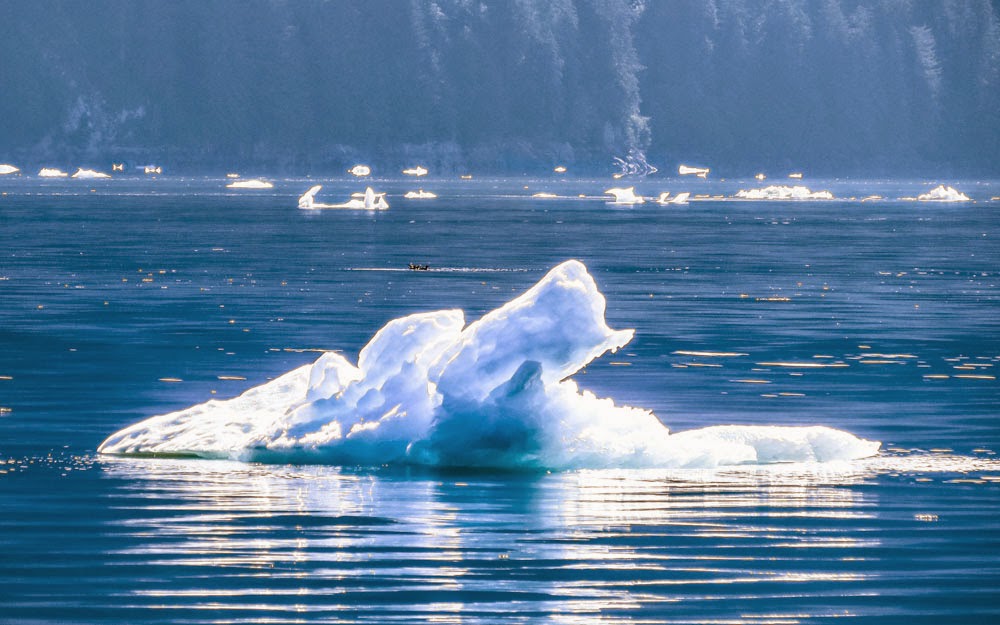 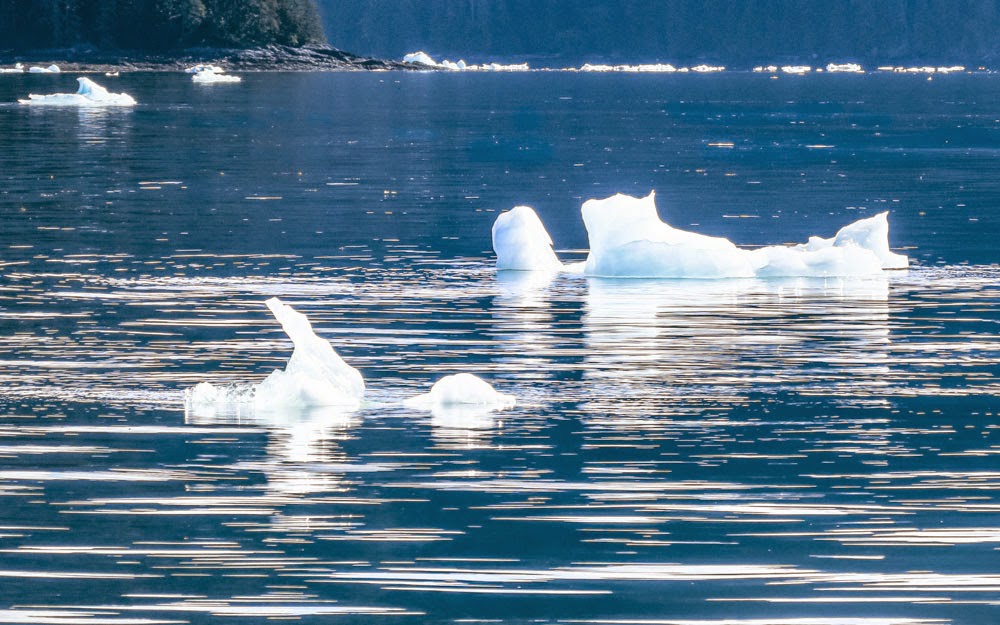 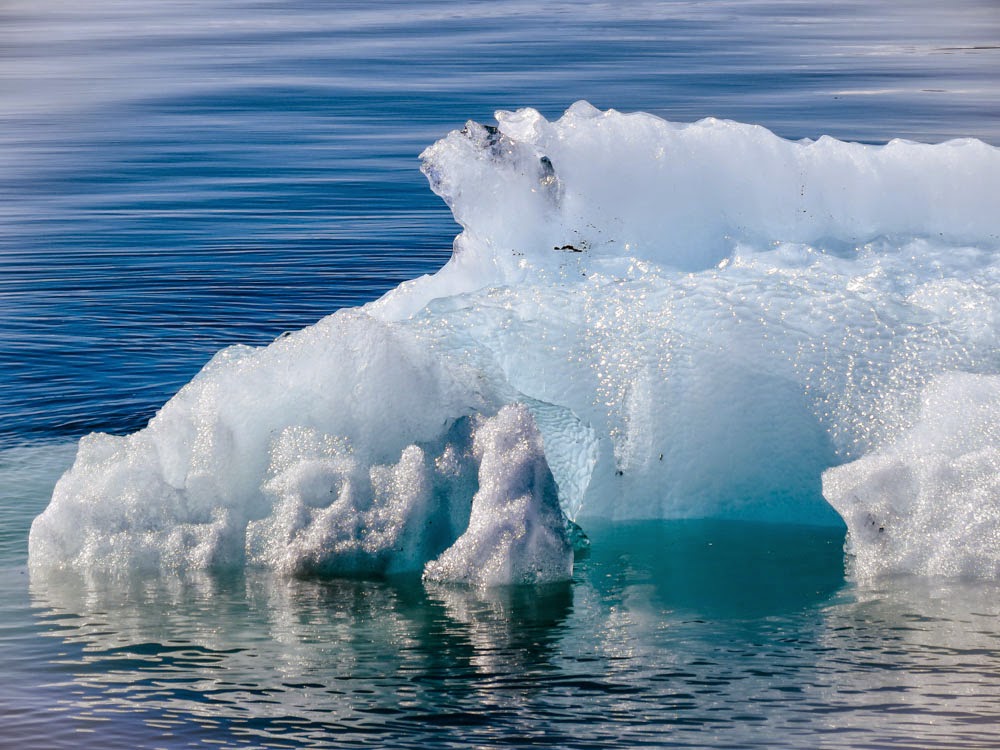 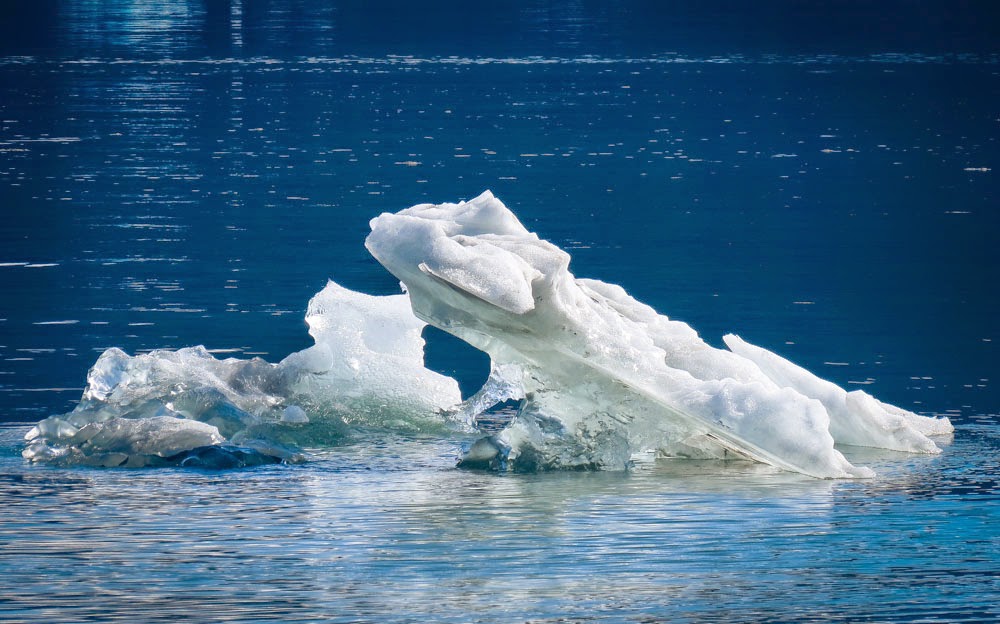 Note the eroded, undercut waterline on some of the icebergs. As the saltwater (45-degree F or less) slowly melts the submerged surfaces, the berg become top heavy and will eventually turn over. Wind, water and weather carve fantastic shapes on Nature’s floating ice sculptures and it’s fun to imagine various recognizable figures… a gila monster? an aircraft? maybe an arrow? 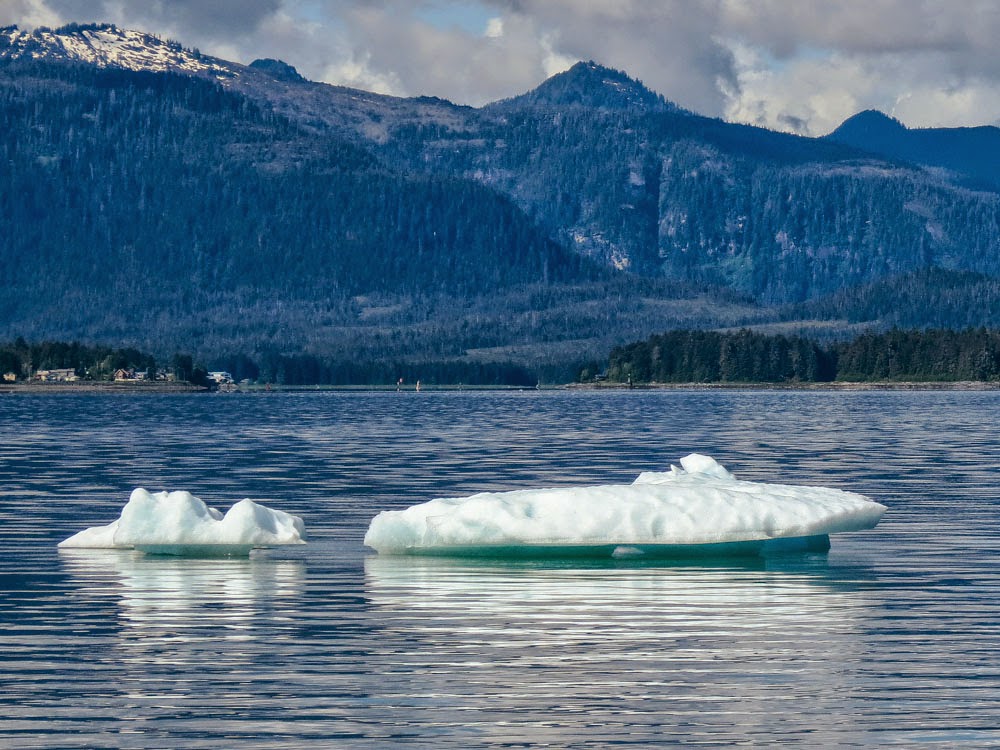 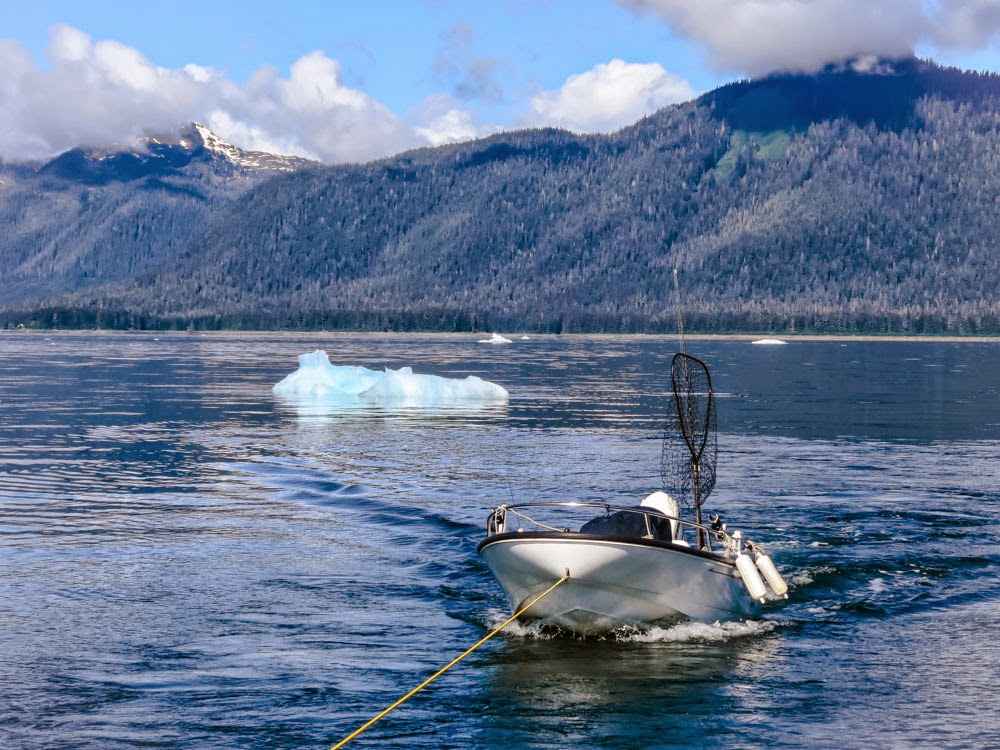 Posted by SeattleDee at 9:50 AM No comments:

Petersburg can proudly boast of its long history of connection with the fishing industry. Generation after generation of townspeople continue to stay involved, some directly as fishermen/women and others through related industries and support services.

Resident or visitor, everyone loves jigging for herring off the dock... or inside the harbor in a small skiffs... or in the main channel from runabouts and fishing boats. It's a Petersburg tradition. Yah sure, you betcha. Today we caught a glimpse of a new generation’s introduction to the fun of fishing.

Links to some older CruiseNews posts from Petersburg:
The Great Herring Experiment
Wind, Rain, Fog an More Rain
A Sudden Eagle Flyby
Petersburg Celebration and Provisioning
Petersburg: Around the Harbor
One More Day in Town

Posted by SeattleDee at 12:50 PM No comments:

Labels: Alaska, at the dock, fishing

Sun shining though an overhead hatch woke me before the 0400 alarm had a chance to ring. The Capt. had planned an early start, scheduling us to catch the end of a flood tide with a favorable current through the 24-mile long Wrangell Narrows. This narrow, twisting, dredged waterway is a main route connecting Sumner Strait and Frederick Sound and carries a lot of interesting traffic, commercial vessels as well as pleasure craft. On this transit we met sailboats, fishing boats, powerboats, an Alaskan ferry and two tugs guiding a log raft around the various bends and channel markers. Of course we met the largest vessels in the narrowest turns, just to keep things interesting.


Posted by SeattleDee at 2:37 PM No comments: