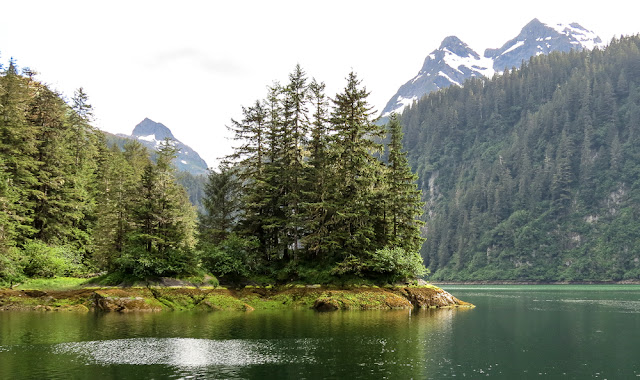 Bear! Another bear! Still more bear! That was Red Bluff Bay on this visit. We were alone in the bay when we arrived, fortunate to have our choice of anchor locations. We headed to our favorite spot, the sheltered cove beyond the waterfall with an unobstructed view of the estuary. Out of sight of the towering waterfall, nonetheless we heard it’s constant thunder roaring in the background while our view included rugged mountain peaks, a wide grassy meadow and river delta and a bear trail along our cove. 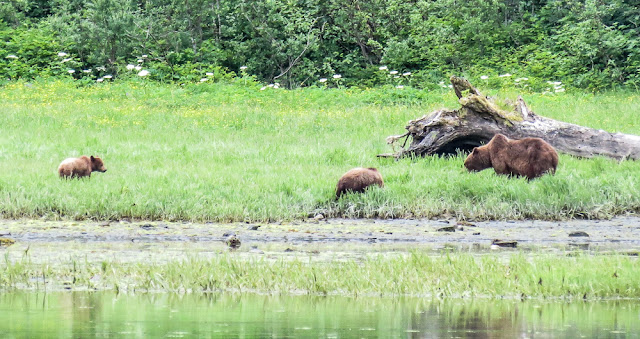 Even before the anchor dropped RL spotted the first grizzly in the estuary. We were barely settled when a sow with two cubs wandered into view, grazing on the lush foliage in the estuary. We jumped into the skiff and headed over for our first brief photo op… brief since the tide was falling and the shallow, rock-strewn shoals present a threat to propellers. As we turned to head back to the big boat, a grizzly appeared directly behind Rhapsody, slowly grazing his way along the shoreline bear trail. Photo op! 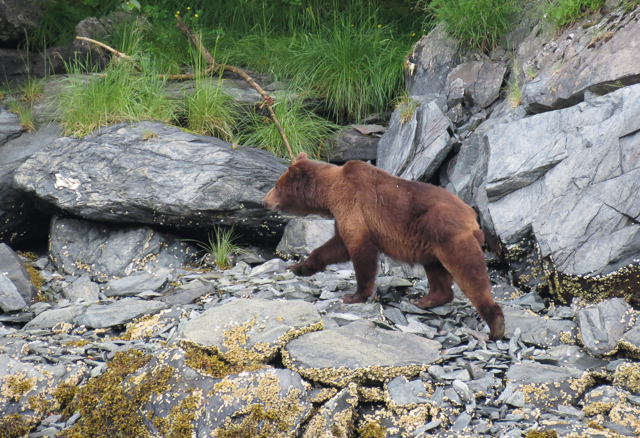 In the midst of transferring the images from cameras to computer, another grizzly appeared along the bear trail, less than 200 feet off the stern. Photo op! 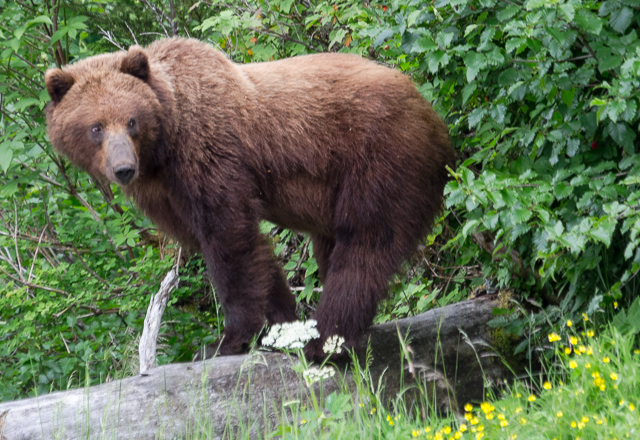 Some time later two more bears hustled along the bear trail, the small grizzly in the lead definitely nervous and finally romping away to disappear around the bend near the small stream. That was a lot of amazing bear viewing during the first 3 hours in Red Bluff. Several more bear appeared in the estuary later in the day.

Very few bear made an appearance over the next 24 hours, then in late afternoon on the third day of our stay one large nutmeg-colored grizzly waded up the shallows of the river mouth. He submerged, then spent long minutes pawing his head, especially his eyes. Pesky fly problems perhaps? Three large adults grazed in the estuary for hours... too far away for photos at a tide too low to approach closer. We settled for bear watching with binoculars instead. 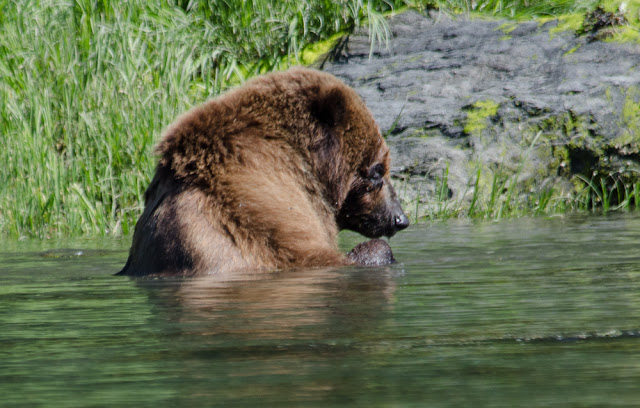 The closest, most visible wildlife for much of our stay was the pair of hummingbirds that buzzed everything of color around the boat: flags, humans in red and yellow gear, geraniums in a galley window, etc. Not quite so bold, two pair of Red-throated Loons kept a cautious distance as they circled the boat, sounding their eerie cry as they cruised along. 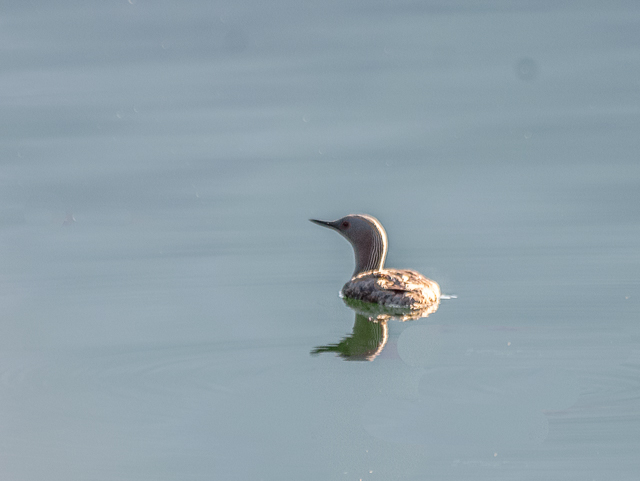 Timing mattered this week for bear watching; we were so fortunate to arrive when we did! No complaints here, between the two of us we shot over 600 grizzly images. Red Bluff Bay is a breathtakingly beautiful scenic location, but it’s truly special when grizzly bear and sunshine coincide.

Posted by SeattleDee at 1:26 PM No comments: 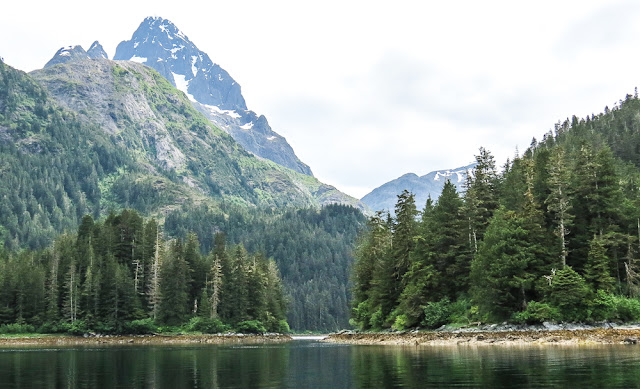 It was almost tempting to run the big boat inside the inner cove, Mickie’s Basin, almost but timing wasn’t right. It takes a high tide to navigate the reverse S-bend course in the shallow, 30-foot wide entry, avoiding the occasional boulder while you keep off the shoals. We chose to anchor in the outer cove and use the skiff to explore the inner basin. Quietly beautiful, this location provided shelter from most wind gusts and swells. Gut Bay had few visitors during our stay. M/V Sea Roamer anchored briefly in the outer cove, waiting for high tide, then headed into the basin to spend a week or two on anchor. Charter boat Ursa Major and two small trollers spent brief overnights in the outer cove.

One scruffy grizzly kept us laughing with his antics, rolling around in various shallow depressions, wriggling and waving his paws while rubbing dirt into his fur coat. Was he cleaning his fur? Were the bugs bothering him? Or was he just fooling around? 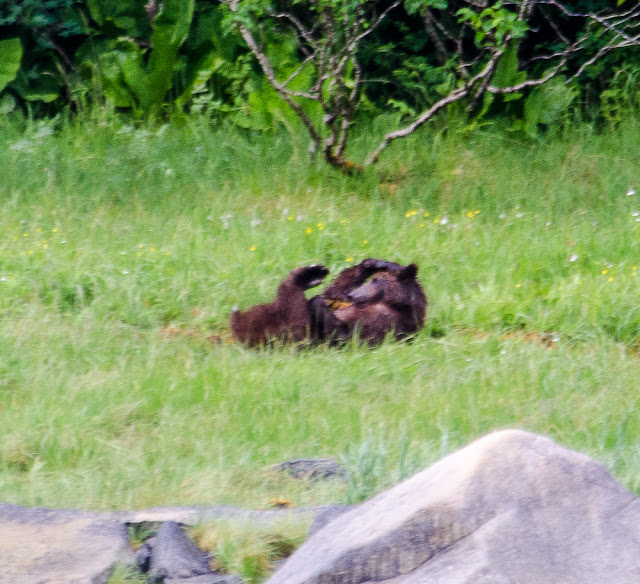 Sea Roamer reported good prawning in Gut Bay, setting traps deep, between 300-500 feet. That's a lot of line to recover when you pull each pot, hopefully heavy with prawns. The spot prawns they shared were delicious! (link) Thanks Lee and Ellen.

Posted by SeattleDee at 1:13 PM No comments:

Security Bay, Kuiu Island, seemed "just one more fine anchorage", nothing special but perfectly adequate. Can you tell how much sushine or lack thereof impacts my attitude?! Sunshine makes everywhere seem special. 1 sea otter circled the boat early in the morning, warily keeping his distance as he went round and round. 6 more otters paddled around the entrance to Security as we departed after a comfortable evening at anchor in a protected passage between two small islands. 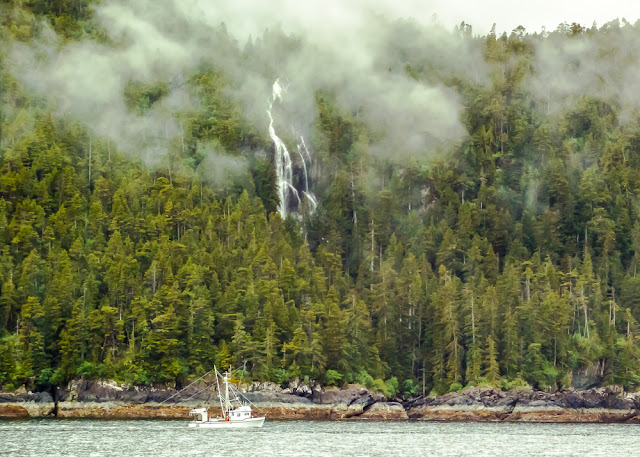 More low clouds and thin fog accompanied us across South Chatham Strait on the way to Patterson. Trollers worked both sides of the channel, some answered my waves of greeting and others ignored us as we passed. We paused inside the bay to watch a lone whale repeatedly blow, surface and disappear. No acrobatics, hardly even a tail display as it disappeared underwater. 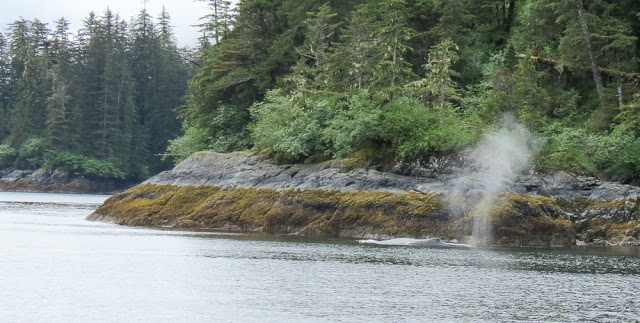 Locating a good anchorage in this deep, narrow fjordlike bay was somewhat of a challenge, especially with predictions of changeable-direction 20 knot winds in the next several days. Should we anchor in deep water with a 5:1 scope on the chain and risk swinging too close to a shoreline reef in this narrow fjord? Anchor farther inside in shallower water near an island at the head of the bay and risk dragging if/when the wind switched direction? We took our time and made it work, but there were moments when I was ready to give up and move on to another less challenging anchorage! 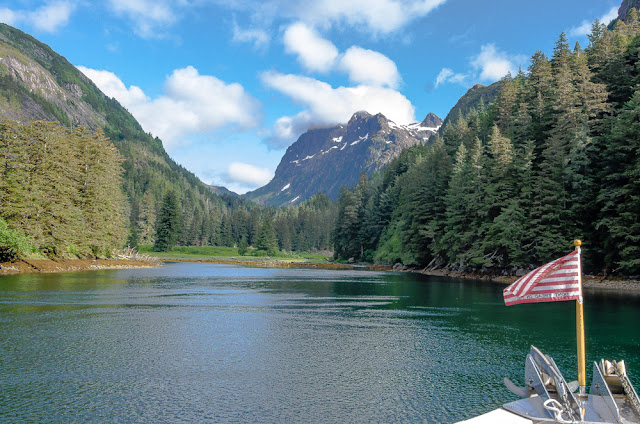 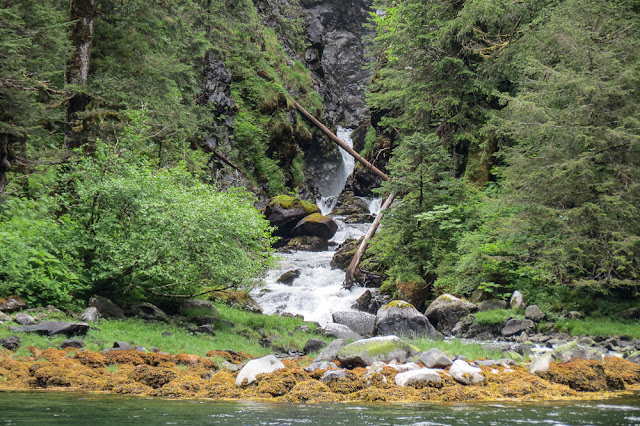 Patterson turned out to be a lovely, comfortable spot to spend several days. One black bear with cub popped in and out of the brush, just beyond good camera range. We settled for binoculars and some long-distance wildlife viewing. 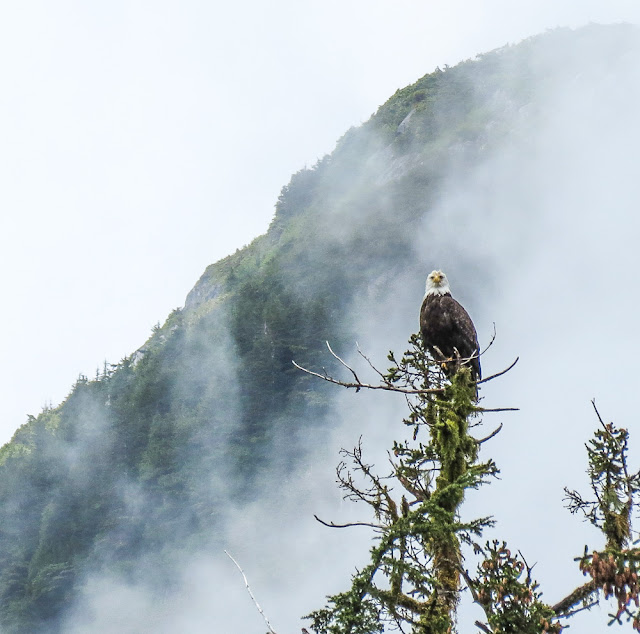 Posted by SeattleDee at 12:25 PM No comments: 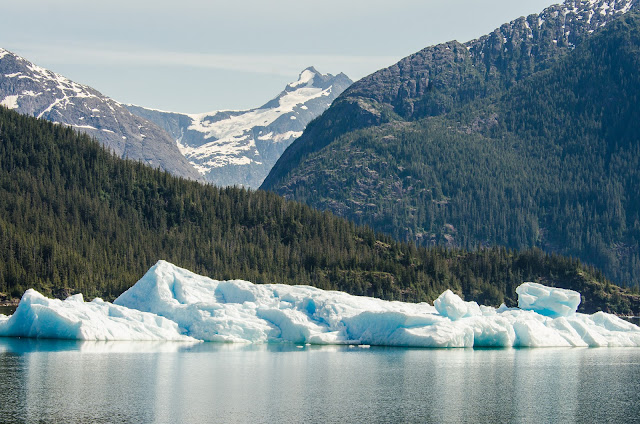 It is easy to spot the entrance to LeConte Bay. Be on the lookout for a fleet of icebergs grounded on the entry reef extending from the north shore. In some previous years we have seen huge armadas of bergs drifting along Frederick Sound just outside Petersburg Harbor, but not this year. No, today we had to travel 23nm southeast of town to view the calved icebergs at the source. 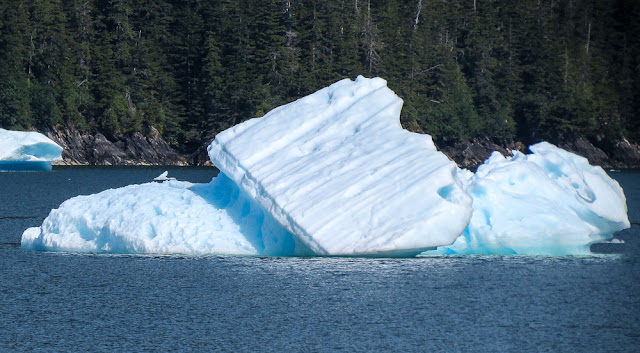 We wove our way through floating bergs, keeping a cautious distance from the larger ones since the bulk of their mass is unseen, hidden underwater by the cloudy celadon-colored, glacial-melt water. Several smaller bergs rolled over, unstable as the warmer seawater melted part of the underwater mass resulting in a top-heavy condition. 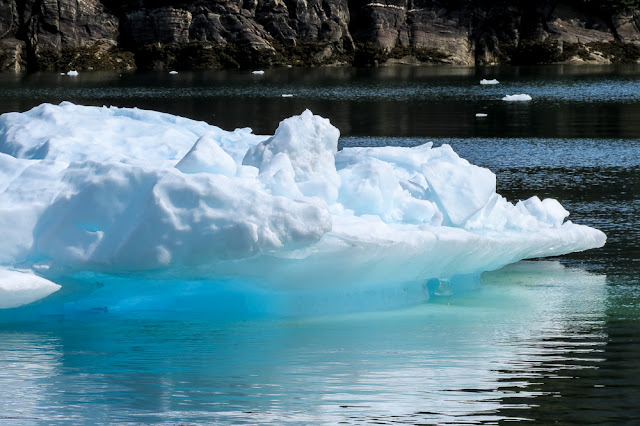 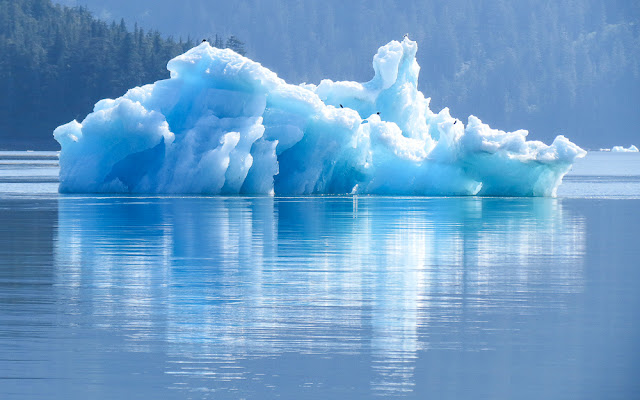 The bergs grew more closely packed as we traveled farther up the bay, finally stopping us just before the last s-bend. We didn’t make it all of the way up to the face of LeConte glacier, never even saw it. It didn't matter, we thoroughly enjoyed our morning iceberg cruise in LeConte Bay anyway. 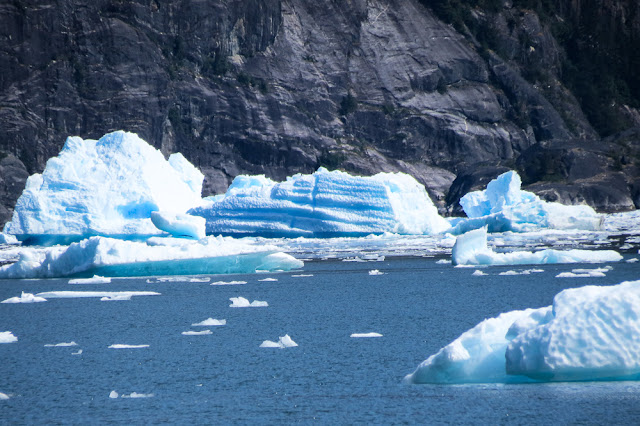 
*-LeConte Bay and LeConte Glacier were named in 1887 for Joseph LeConte, professor of geology at the University of California.
*-LeConte Glacier… is perhaps the most studied glacier in the world. For 23 consecutive years student teams from PHS have surveyed the face and tracked the glacier’s movement.
*-The snowfield above the glacier runs up the Stikine River valley.It has the distinction of being the southernmost active tidewater glacier in North America.
*-The spring of 1998 saw the waters of Frederick Sound choked with bergs after a half-mile of ice from the glacier calved into the bay.
*-LeConte Glacier (is like) a tube of toothpaste. The more snow pack and weight that compresses the ice further up the valley, the more ice advances into the bay.
*-For the past decade, the face of the glacier has remained stable… within an average distance of 92 yards of its 1999 position. It’s tendency is to move forward with the spring melts, retreating again in the fall. LeConte has retreated 1.2 miles since 1991.
*-In some places the ice has been measured at 4400 feet thick.
*-At the terminus, about 200 feet of ice rise above sea level, and 800 feet are hidden below the waterline of the bay.

Posted by SeattleDee at 5:17 PM No comments: