We always look forward to a stop in Meyers Chuck, a small settlement with a lot to offer. The urge to stay long term is tempting whenever we stop and take time to visit, wander the beaches and walk the trails, kayak the Back Chuck, tour the Gallery and chat with friends new and old. 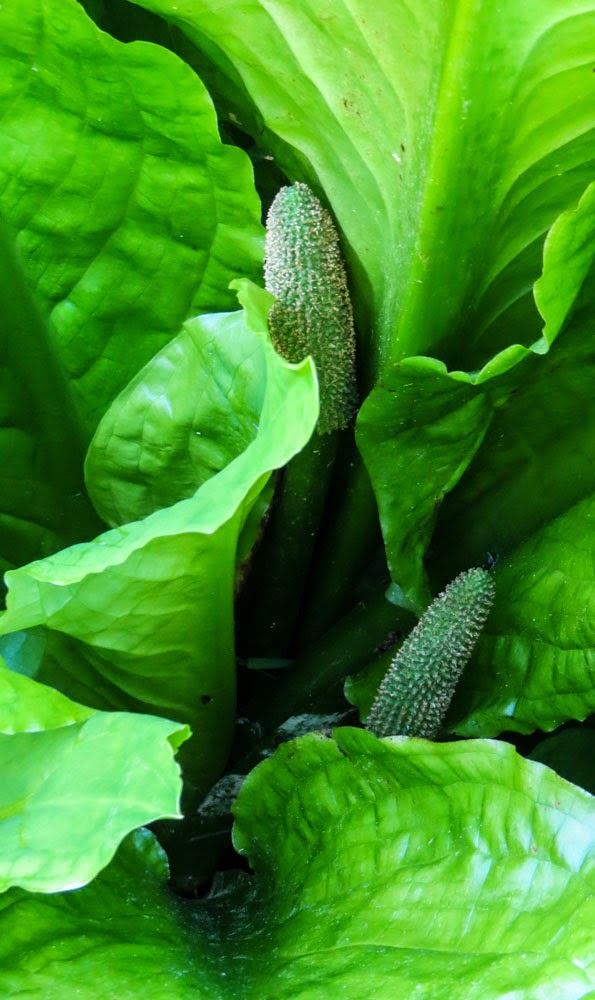 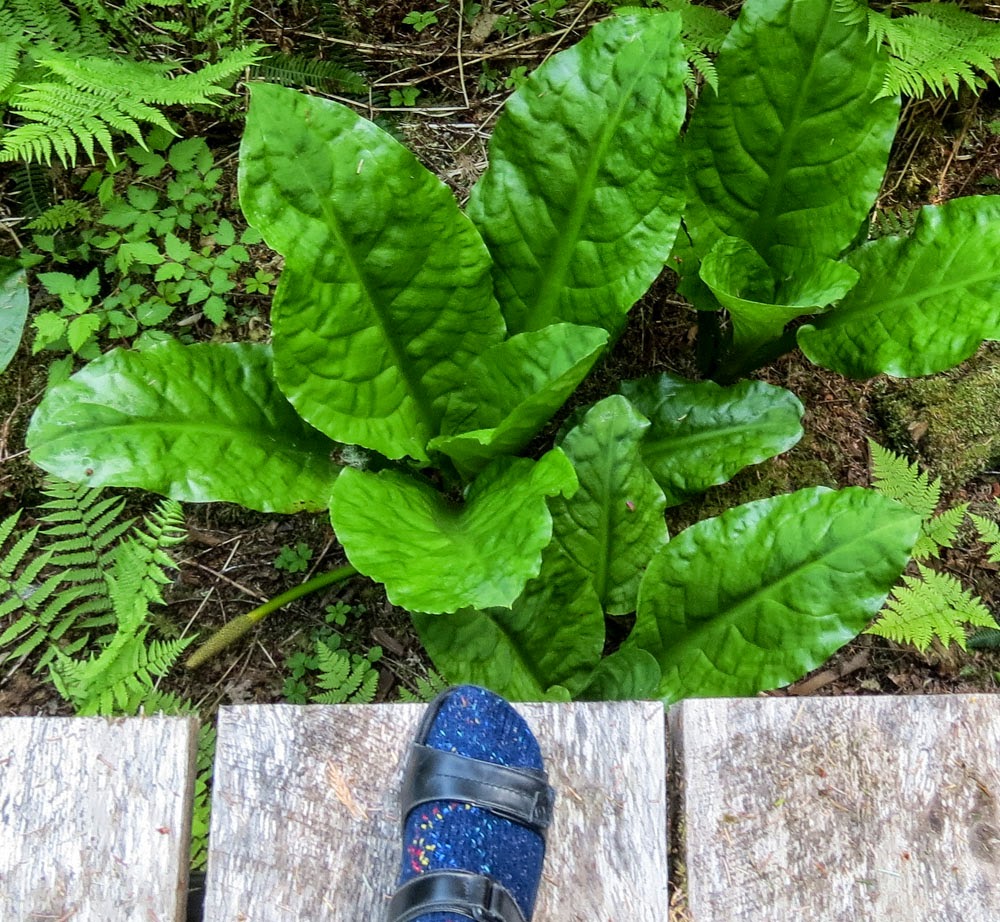 If you’re looking for a special Alaskan hideaway, this could be it. Buy a cabin or even a small island with its own dock. Keep in touch with the outside world or stay remote... well sort of remote but with weekly mail service and quick access to Ketchikan via small boat or float plane. Do you want grocery delivery by floatplane - it’s routine in The Chuck. Okay, moving on before this turns into a real estate pitch!


Notable for its sheltered harbor with a long dock and fresh water, the Chuck is swell-protected spot to wait out chunky water in Clarence Strait. This year we stayed a day longer than planned during a moderate blow. 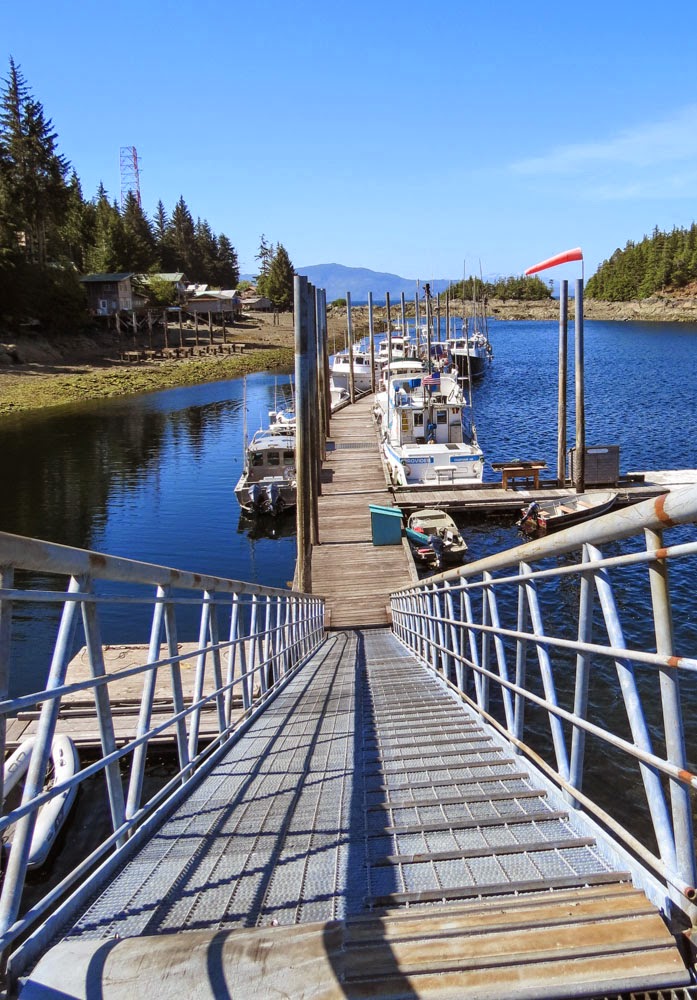 F/V Patsy and F/V Provider were in their usual spots at the dock when we pulled up, the second pleasure boat to arrive, and tied up between them. Within the hour 7 more boats arrived; 5 of them found space on the dock and the others anchored out in the bay. Setting an anchor well in the Chuck’s slippery mud bottom requires special care and just a touch of luck. A heavy, 3-masted, steel sailboat arrived later and discovered just how slippery that mud could be as she dragged anchor during the afternoon blow, her stern heading straight for Rhapsody! What?! Averting collision, the captain raised anchor and motored to another part of the harbor to reset, and the boat held position nicely overnight. I slept better knowing he would drift down on something or someone other than us if he dragged anchor again.

Afternoon entertainment was a lengthy (very lengthy) airshow, watching a skilled but cautious floatplane pilot make pass after pass to select his landing approach while 3 anchored boats swung around in the gusting winds. He circled at altitude once or twice to check out available “runways” and tried an approach up-channel from the north, buzzing the anchorage only to pull up and circle again. Then he tried a down-channel approach, dropping in steeply over the southerly tree-topped hills, and pulled up to circle again. 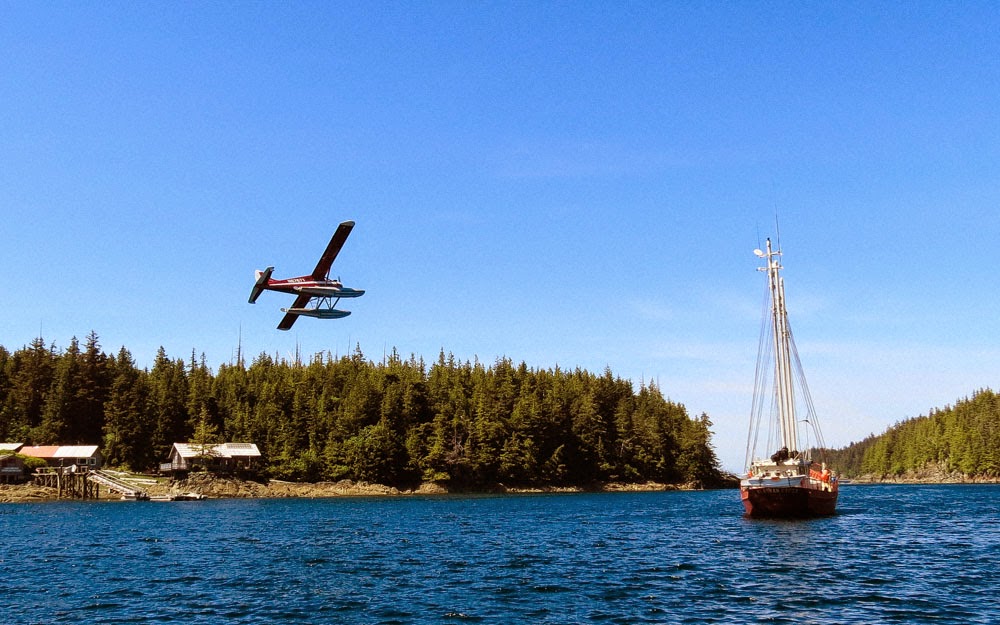 Next he swooped in low across the westerly reef from the strait, and the onshore observers thought he had it dialed in, but he turned, climbing to circle again. The pilot checked out each approach again. Heavy, unpredictable gusting winds and moving boats made the landing a challenge but finally he set the plane down gently… and then had to taxi downwind while threading his way between those three anchored boats. What an airshow! His takeoff was noisy, but routine enough to be ignored without any photos. 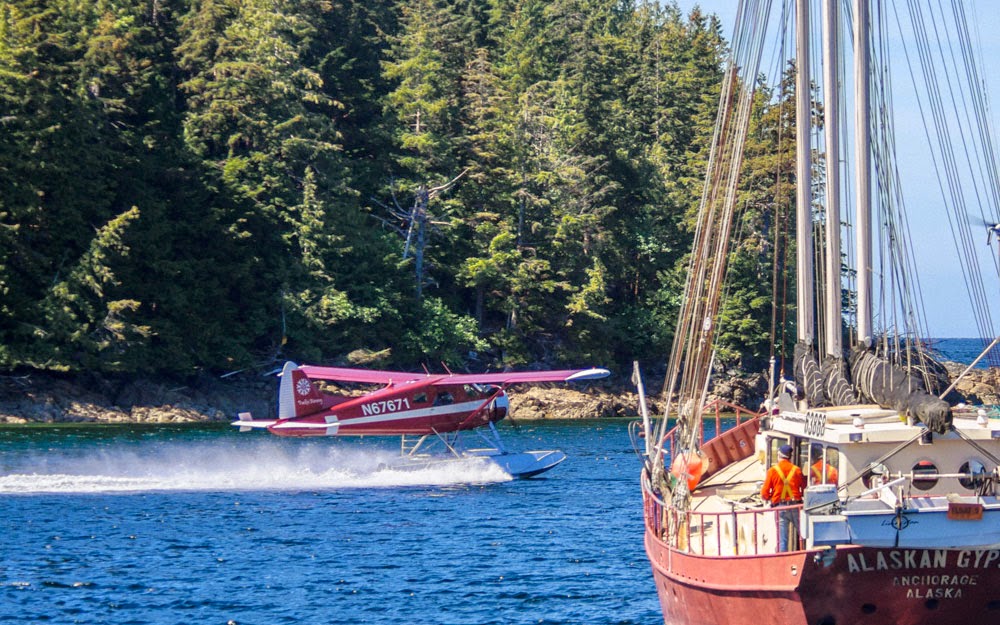 Posted by SeattleDee at 1:38 PM No comments:

Khutze Inlet to Hunt Inlet
Day 8                                    103.9 nm
The run along Fraser Reach was memorable for a humpback sighting and scores of surfacing porpoise along our route. Smooth water and a favorable current push helped to brighten the cloudy day. Hunt Inlet holds a scattering of homes, cottages and an old shipyard. Usually quiet, the inlet hummed with activity until dark as the locals buzzed about in their skiffs, heading into the back of the bay and out again. What happens in those back waters?

Hunt Inlet to Brundige Inlet
Day 9                                    40.9 nm
Porpoise along the route kept us entertained, as we busily scanned the water looking for whales that never did appear. Increasing wind and waves dictated a short day, keeping us on the B.C. side of the border. The next morning’s 0400 weather broadcast would determine whether we hung out on anchor for days, or would make a safe and comfortable crossing of East Dixon entrance into Alaska.

Brundige Inlet to Ketchikan, AK
Day 10                         56.5 nm
Environment Canada’s 0400 weather forecast predicted this would be THE day to make the run to Ketchikan, a day in between two periods of peppy weather with heavy ocean swells developing offshore. We were ready to go before dawn, just waiting for enough light to snake our way around some large rocks in the shallow entrance to our anchorage cove. The weather forecast was spot on; we had absolute flat, calm wind and water for the crossing. Hooray! An added bonus was spotting 2 whales at the south end of Tongass Narrows, the entrance to Ketchikan’s main waterway. What a shock to transition from scanning miles of empty water looking for whale spouts, to dodging through a fleet of small boats fishing in a local salmon derby and then gazing skyward at the 3 huge cruise ships docked downtown. The continual, annoyingly loud, mosquito-like buzz of seaplanes reminded us we had arrived in Ketchikan. Now we can slow down and wander - no schedule, no plans, just enjoying each day.

Posted by SeattleDee at 11:52 AM No comments:

Khutze Inlet is a great place to spend some time when VHF weather posts strong wind warnings, then gale warnings for the area. As predicted, winds began to puff as we neared Khutze, but the water inside the inlet was glassy smooth. The head of the inlet was empty when we arrived so we returned to our favorite spot at the foot of cascading waterfalls, thundering down from a snowfield above. We found much less snow this year on the surrounding peaks, and none around the shore.

While we arrived in dry, settled weather, the rain soon followed. It’s Khutze, it rains, that’s just how it is. Raindrops beat down on roof, pounded on portholes and hatches, and threatened to drown out the background roar of the cascading waterfalls. Noisy calls from Bonaparte gulls and shrill shrieks of eagles occasionally punctuated this steady rhythm of water music. Otherwise the world around us was quiet. Each glance outside revealed our neighboring waterfall grow in size.This was a good day to bake cookies, work on photography, and stay tucked inside while it poured buckets outside… well, several inches at least.

New neighbors arrived in mid afternoon, anchored farther across the river delta, closer to the primary channel, and reported the weather forecast had not improved. Upcoming 35-45 knot winds and 2-3 meter seas were still predicted, good to know since surrounding mountains block VHF radio reception inside this fiordlike inlet.

Torrential rains increased the number of waterfalls around the anchorage and greatly increased the volume of water coming over each fall and down the river. The flooding river carried muddy water into the inlet, bringing scores of downfall trees into the anchorage. While most of the debris posed no immediate problem, two long specimens did snag on Mola Mola, a 58’ Fleming. A skiff assist from Great Bear II took care of the threat, but the vessels anchored close to the river must have kept an uneasy log watch that night. We were lucky, no trees, logs or other debris floated close to us in our waterfall site.

After several days the “quasi-stationery” storm front passed and we were more than ready to move on. Bear sightings would have made this rainy stay more exciting, but we enjoyed relaxing and socializing, meeting up with old friends and making some new ones.

Posted by SeattleDee at 11:37 AM No comments:


Taken from a distance these photos are a bit blurry, but the helilogging action was crisp and skillful!

We paused in Jackson Passage to watch a large Vertol helicopter lift logs from a hillside logging operation and drop them into a boomed area in the saltwater below. The chopper pilot darted about briskly, maneuvering with pinpoint precision to lower a cable with heavy hook into place for the hillside crew setting choker; a quick lift and release into the chuck; repeat over and over. The booming crew kept busy retrieving and bundling chokers for the helicopter to return to the hill. 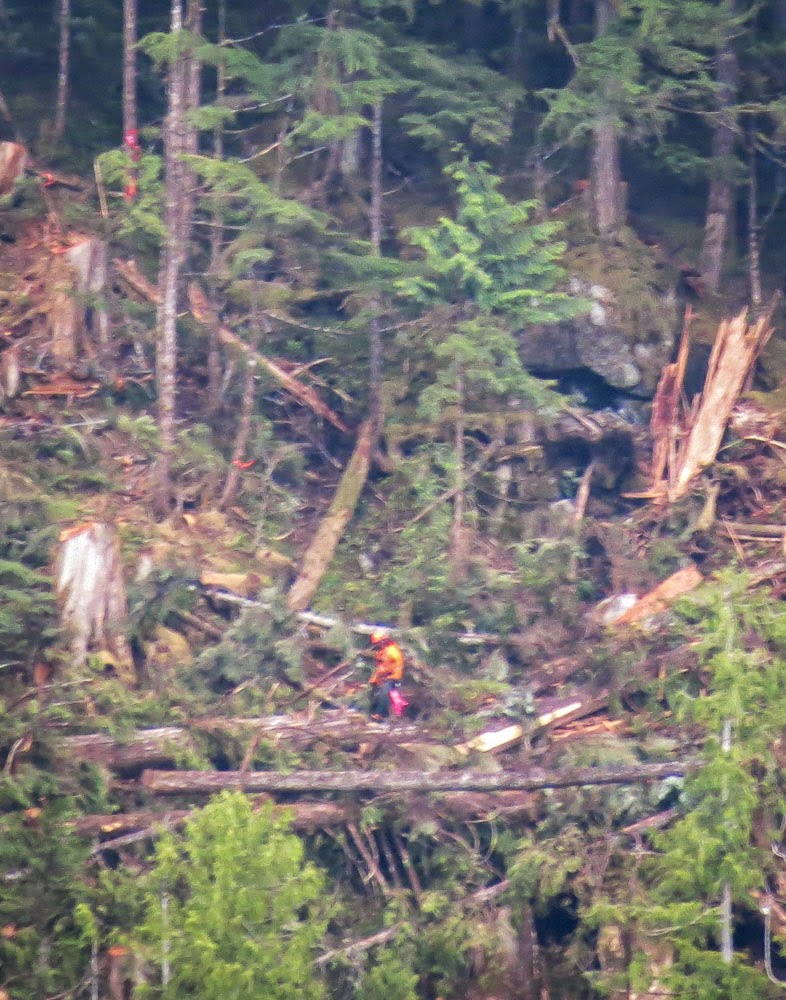 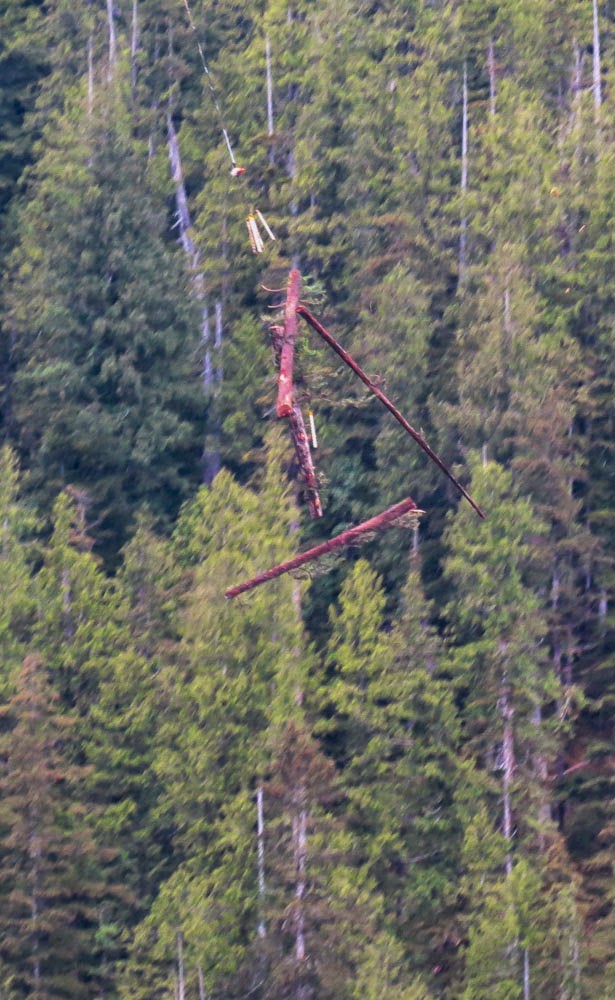 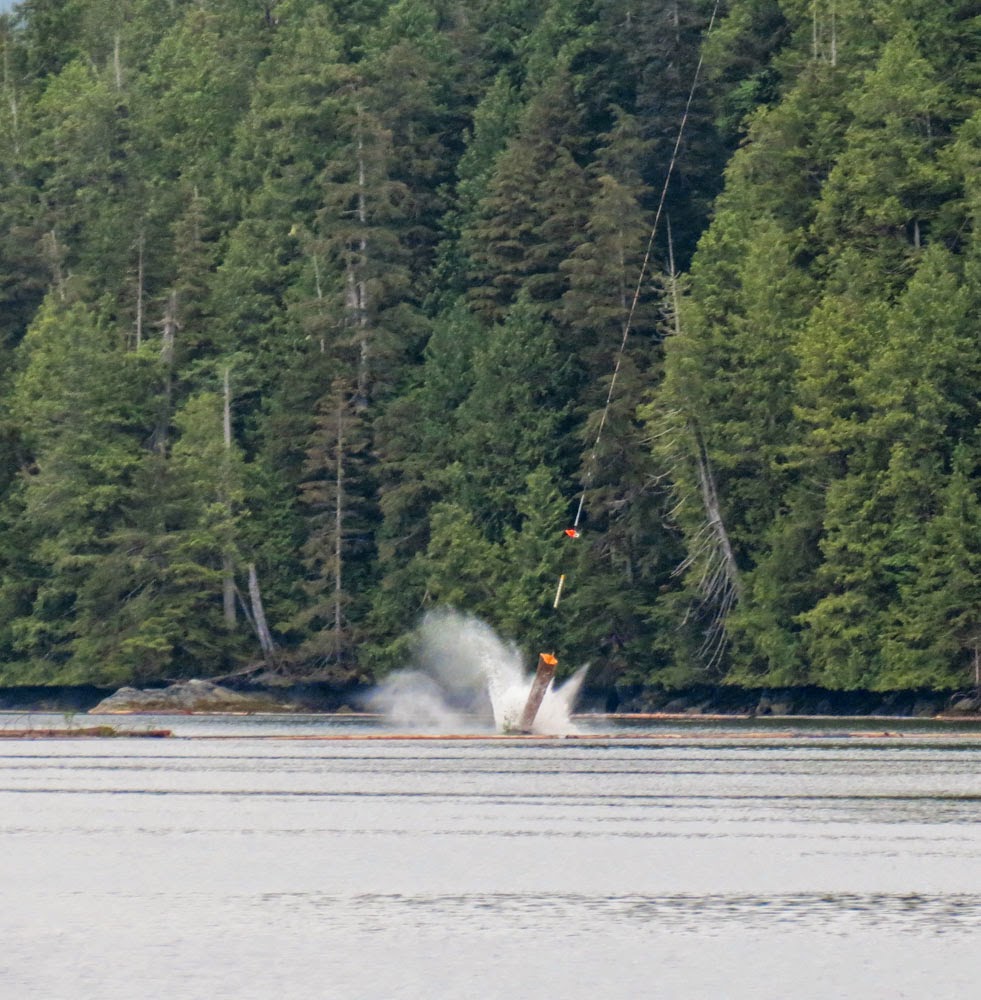 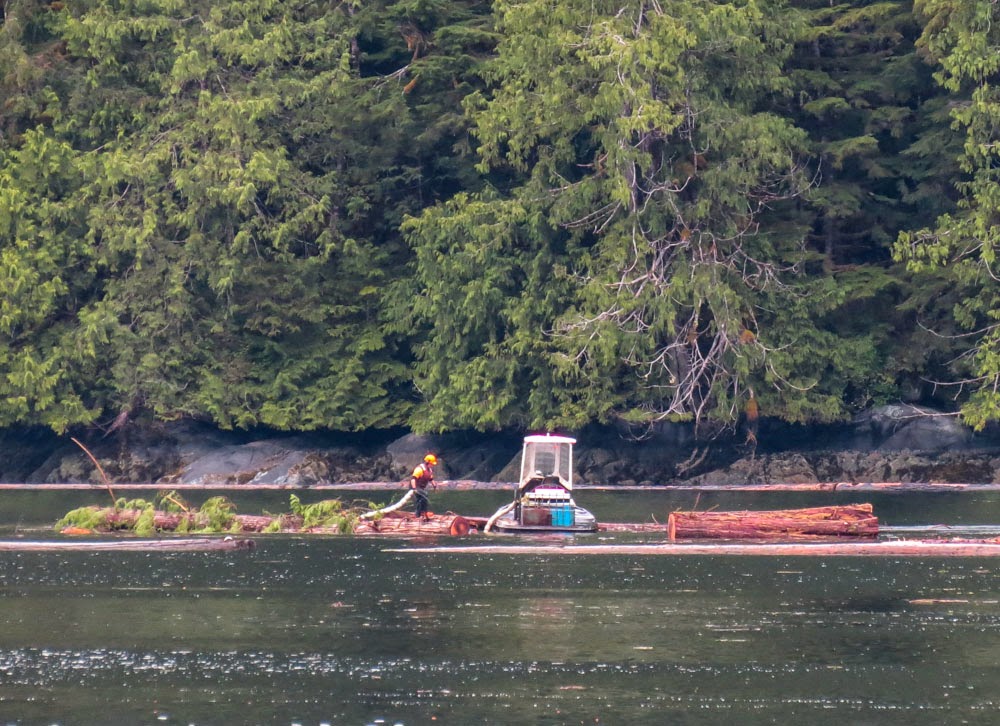 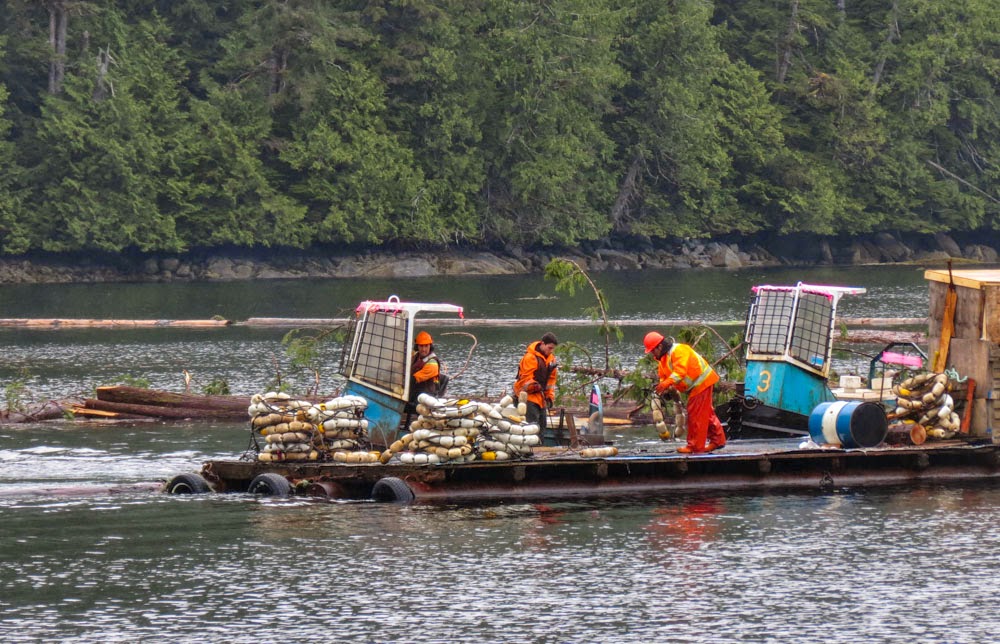 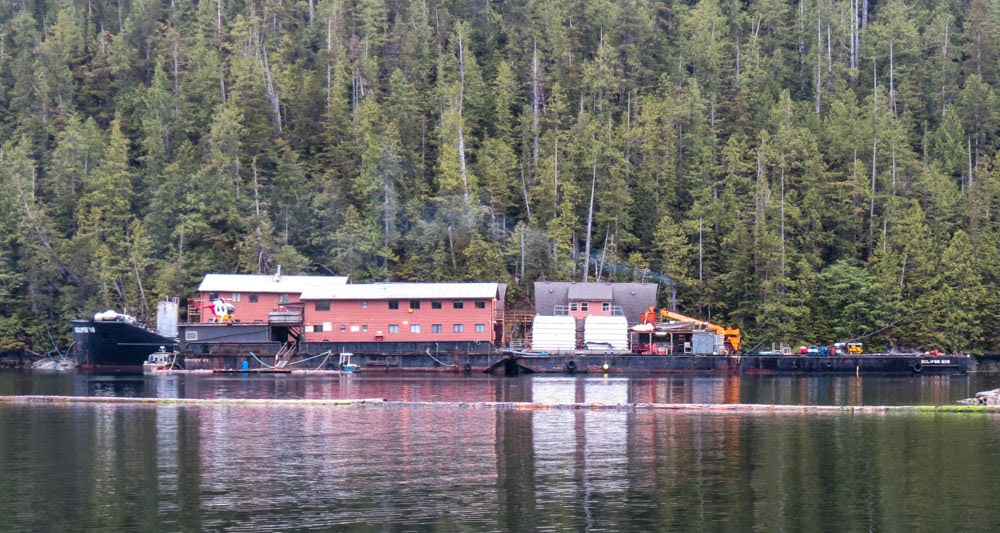 Aha! Remember the tug with two barges of cedar logs that we passed near Bella Bella? Now we know where they came from, if not where they’re headed.

Posted by SeattleDee at 11:48 AM No comments:

The 0400 weather reported lumpy water and 18 knot winds at Egg Island, with winds predicted to drop later in the morning. We went back to sleep. Our actual 0745 departure was a much better choice with rippled water and light winds for our travels. Oh, how I appreciate Environment Canada weather reporting!

Half a dozen fat sea otters floated around in Smith Sound, as wary as ever and keeping their distance from the boat. One lone killer whale surfaced inside False Egg Island and worked the shoreline of nearby islets. Wildlife watch certainly tops log watch for entertainment value.

A few tugs passed us today, heading south with unusual tows. One tug towed a single barge piled high with a jumbled stack of scrap metal. Occasional bits and pieces were recognizable, but mainly the cargo was a rusty, tangled mass. 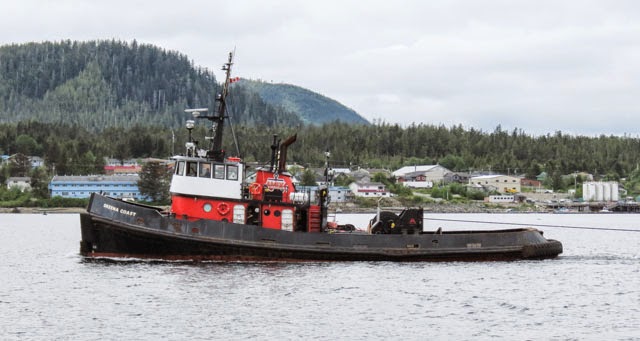 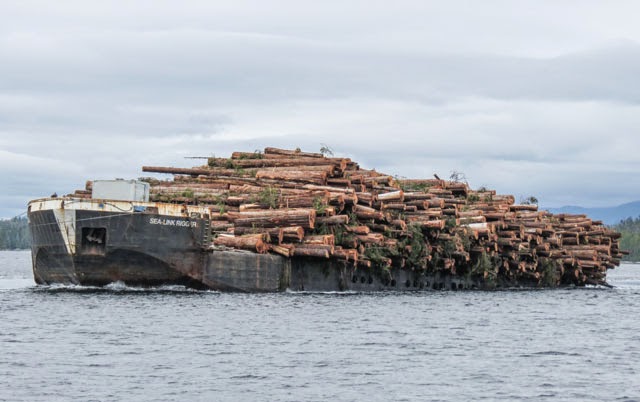 Near Bella Bella another tug pulled two barges piled high with a forest of stacked cedar logs, many still bristling with green-needled branches. An unusual sight; we’re used to seeing log barges carry stripped, de-branched logs. Where did each tug and tow come from? They were southbound, but I wondered where were they headed?

We often run through Reid Passage, a more protected route inside of Ivory Island, but this is the first time Oliver Cove, a B.C. Marine Park, has been empty. The cove is fairly open to the channel but the anchorage was comfortable, with a good-holding bottom and no issue from passing boats' wakes. A well buoyed set-net floated off the south point at the cove’s entry and two more nets bobbed around along the far shore across the channel, but no one arrived to tend them during our stay.

Posted by SeattleDee at 11:24 AM No comments: