Whales, wind and weather!
(click on any photo to enlarge - especially on the whale and bear shots)

Hoonah
There we were, across the parking lot from the dock ramp, chatting with a fisherman and fish store owner, and watching for the airport van. Oops! The van no longer operates, so Sarah and Gerry shared a ride from the airport with a local resident, and we missed their arrival. Some welcome to SE AK when you have to phone your hosts to let them know you’re standing in the cockpit looking for them!!

We toured the town, checked out the local sporting goods shop and walked the docks. Seafood ruled the day with salmon bisque and lox on crostini for lunch, smoked salmon snacks, and barbecued salmon with Ron's special sauce for dinner. Overkill? maybe, but after M/V Salty Dog gifted us a freshly caught coho it seemed a good idea to postpone the chicken enchiladas and chorizo Spanish rice until the next night. Fresh is better with fish! 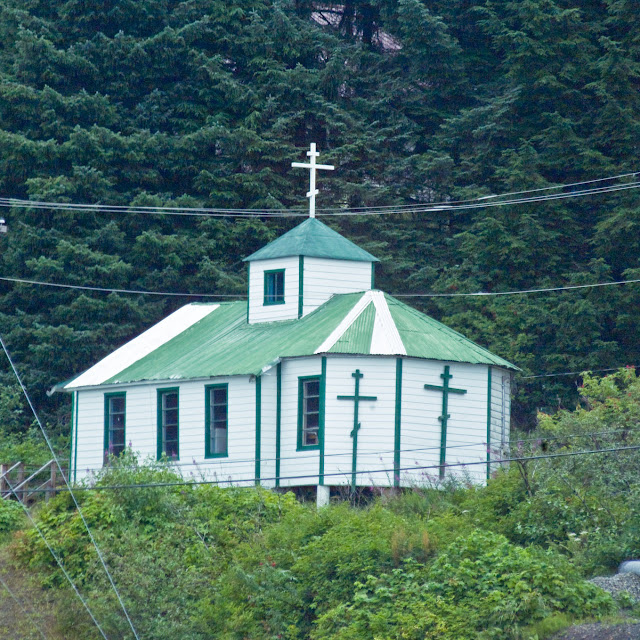 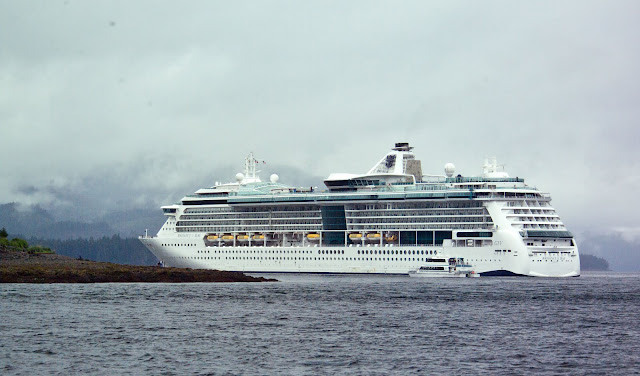 Radiance of the Seas, with a background haze of smoke from the Yukon fires.

(Note: the photo is from the return trip to Hoonah, but I can't get it to move to the end of this entry!!!) 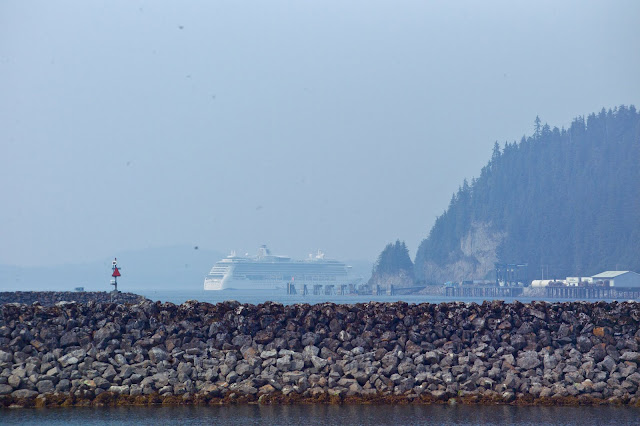 We were barely out of the harbor, just south of Hoonah's Grave Island, when we spotted a pod of whales cruising along the shore. We followed them for several hours, giving Gerry and Sarah their first look at humpback whales bubble feeding, breaching, fin slaping and surface cruising. Gerry shot some terrific breaching photos and his 500mm lens filled the frame with amazing detail. The whales changed a routine, hourlong scenic trip into three hours of excitement.


I've read that whales have unique tail markings. This should be easy to compare to earlier photos.

I wonder how comfortable those fishermen are, sitting in a small boat so close to such large whales? 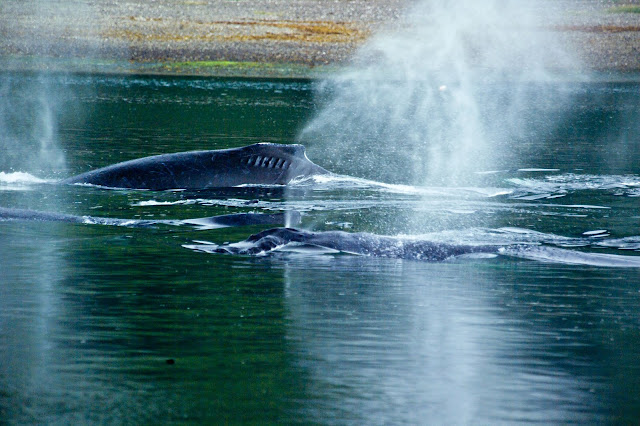 Nat'l Geographic info: In Alaskan waters, humpback whales work as a team to catch their meal by blowing a net of bubbles. The endangered mammals actually herd herring with a ring of bubbles, trapping them. Then, the whales rocket to the surface, mouths open, to capture the fish.

Elfin Cove
We had an sunny early start with a favorable current and planned to transit South Inian Pass near slack. That was the plan. Then we had a repeat of whale watching in Port Frederick so we lingered. Two pods were bubble feeding separately and then converged. More whales were spotted from Pt. Adolphus to South Inian Pass. We saw spouts from fifty separate whales today, including four orca (killer whales) at South Inian. We missed our timing, but it was worth the longer, slower cruise.

The day turned cloudy early on and fog caught us as we approached Elfin Cove. We tied up to the only open slip at the head of the dock - a lucky moorage though the extreme minus tides left us briefly with a little less than three feet under the hull. Elfin Cove is much quieter, less populated and considerably more neglected than it was on our last visit. Instead of an active fishing community it just seems to hold transient trollers, a few summer cottages, a sprinkling of liveaboards and a bunch of fishermen at the several lodges. The store alone seems remarkably unchanged.

Sarah, Gerry and Ron fished mid-day, catch-and-release with some pinks and a mess of rockfish in a full day of heavy fog. Fishing lodge guests were stranded since seaplanes couldn’t get in or out, though you couldn't tell it from their smiles at the thought of an additional day of fishing. It was difficult for us to remember the sunny days of last week. 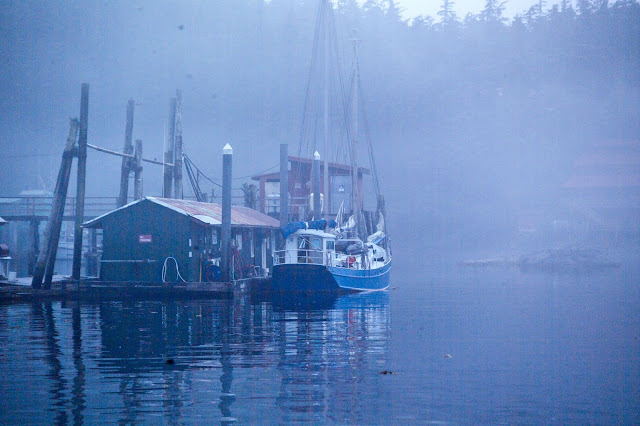 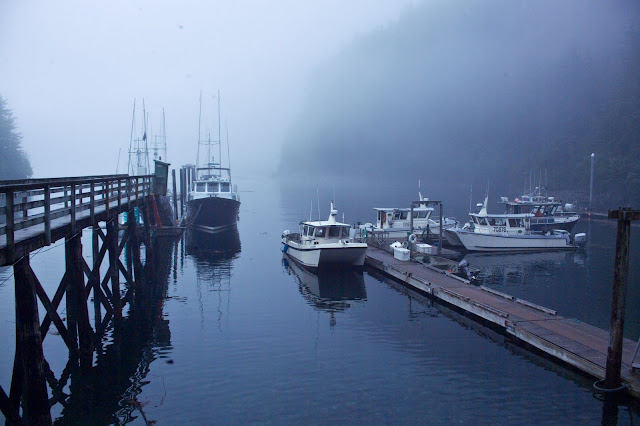 Dundas Bay
Dundas Bay is within the Glacier Bay National Park, but water access is not regulated here as it is in the waters of Glacier Bay itself. I couldn't remember the last time we were in Dundas, or in Glacier Bay proper either. What a surprise to check the logs and discover the dates were 2003 and 2005 respectively. It was more than time to revisit and recheck those wonderful memories.

The water was dotted with sea otter as we entered the bay - that did not sound positive for crabbing there! We first cruised the west arm for some glacier viewing, and then ran to the head of the bay to anchor. We set several traps but only caught a dozen prawns and zero crab - could it be the otters? There are several studies currently researching this topic, but cruising boaters already have an answer.

One black bear roamed the beach but no grizzlies appeared. This youngster ignored us at first, but grew nervous as we idled offshore for photos. 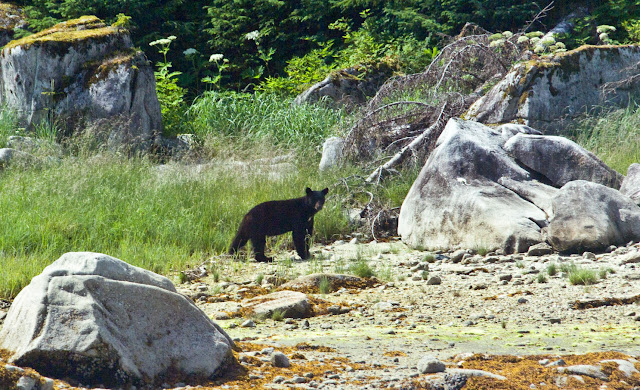 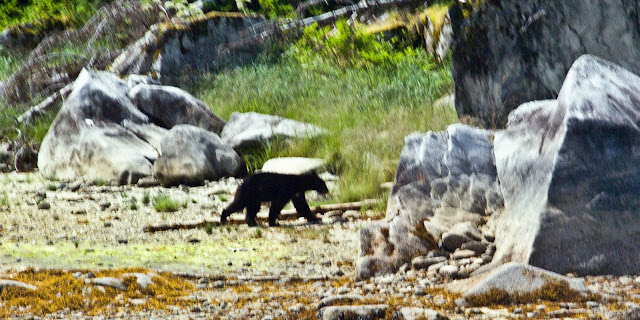 Then the bear hid and watched the bear-watchers. 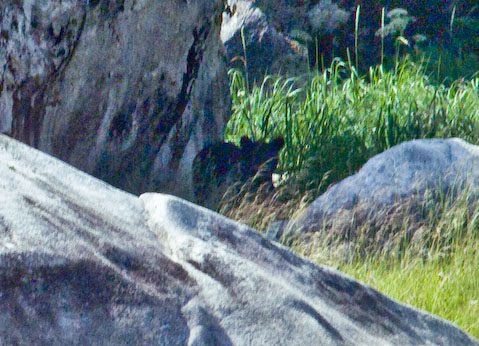 The Fairweather Range is spectacular, with its jagged peaks, looming ice fields and many glaciers. And check out the fog rolling in to surround us - again! It (the fog) was sneaky as it shot tendrils around hillsides and sent wisps down canyons, peeking over ridgelines before it rolled its mass up the inlet. 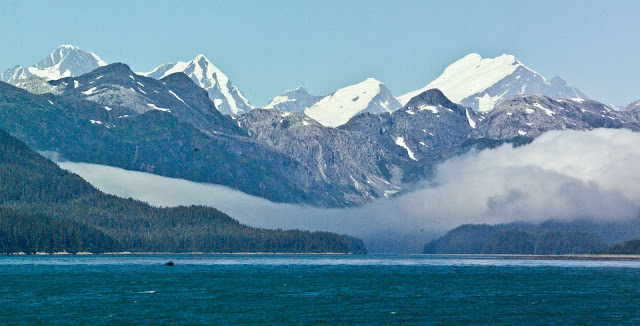 Note the two different shades of green/blue as the glacier-fed water of the Dundas River meets the saltwater carried in from the Gulf of Alaska by Cross Sound.

Excursion Inlet originally held an Alaskan native village. Oral history reports the Huna Tlingits occupied Glacier Bay for thousands of years until glacial advance forced them out into Icy Straits, Excursion Inlet, and the Pacific coast. During World War II Excursion was used as a prisoner-of-war camp, and a strategic base for the Aleutian Campaign. The inlet has had a fishing cannery since 1891. The current plant, constructed in 1918, still functions today. processing pink and chum salmon, as well as salmon roe, salmon caviar, halibut and sablefish. It is located near the mouth of the inlet, about 40 miles west of Juneau. Its seasons run from late June to mid-September. Excursion Inlet Cannery is one of the largest fish canneries in the world and was acquired by Ocean Beauty Seafoods in 2003.

Excursion Bay's western shore is within the boundary for Glacier Bay National Park but water access to the bay is not controlled as it is in Glacier Bay proper. We headed for the cannery dock on the eastern shore. Several packers transited the inlet and tied to the same dock during our two day stay. Their task was to pick up salmon from the fishing fleet and deliver the catch to the cannery. Swirling clouds of squawking, feeding gulls filled the sky and celebrated the cannery activity as they gorged themselves on the slurry pouring into the saltwater. Scenic but noisy. 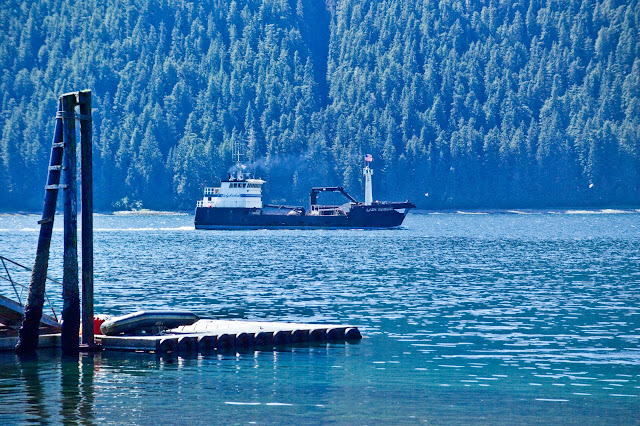 A few sport fishermen arrived to moor overnight, but the dock felt deserted after the packers left.

This is all that remains of the old World War II pier. 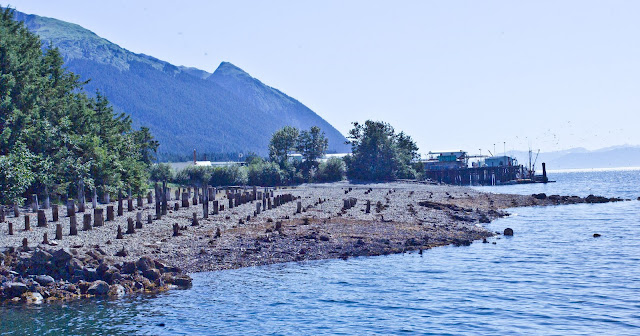 Sarah always looks stylish, even in foul weather gear. The weather was sunny but cool with a biting wind so rain gear functioned as good wind protection on fishing trips. 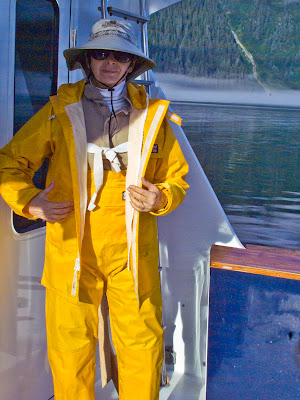 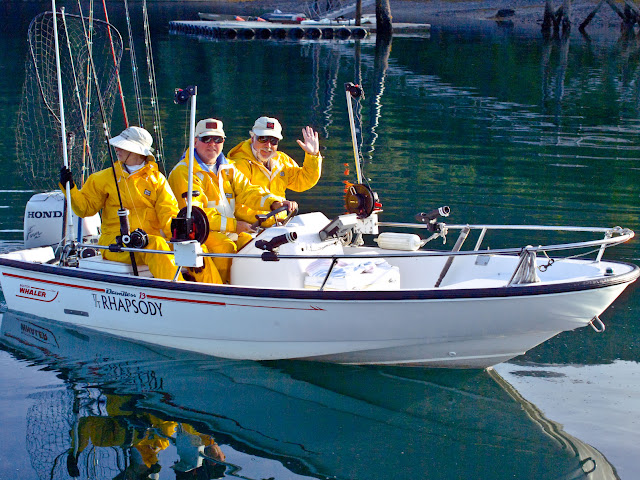 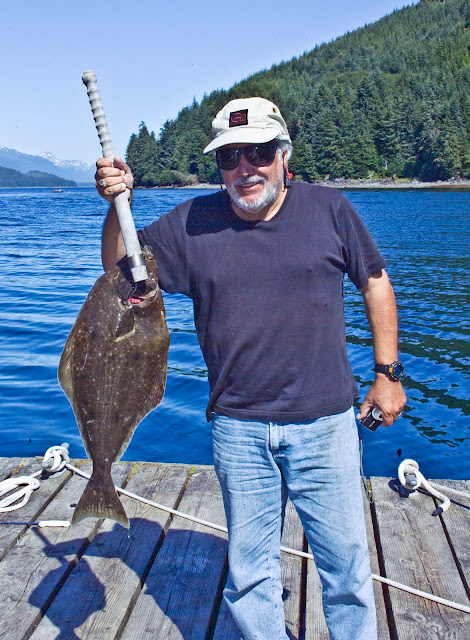 We kept one small halibut and enjoyed it for dinner, topped with tapenade and wrapped in prosciutto. Really big halibut are a fun challenge to catch, but I think the little guys make the best eating. 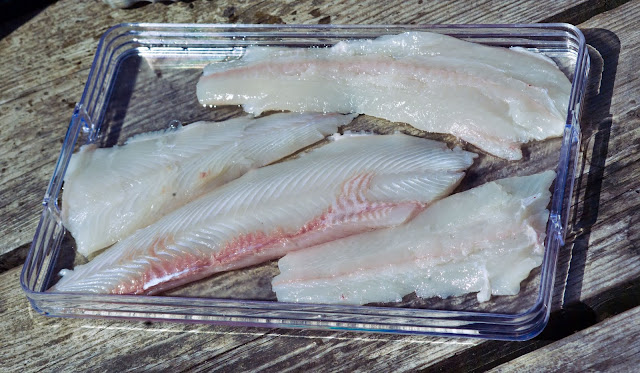 The sunshine was such a treat and inspired several shore excursions; touring the cannery grounds, exploring the beach, walking the roads and trails, investigating the museum and checking out the ice cream supply at the company store. Winds buffeted the dock and kicked up whitecaps on the inlet water, but who cares when you're moored and it's sunny?

Swanson Harbor on Couverden Island was the next stop, and we bounced and rocked as the wind really kicked up. Smaller boats moored across the small dock were happy to have us as a breakwater and wind screen. The weather forecast for the next few days prompted us to return to Hoonah a day early, rather than risk a run in really ugly water to meet the airline schedule. August's fog and changeable weather have arrived waaaaaay too early.