We spotted two humpbacks on the thirty-mile run from Sitka Harbor to Baby Bear. One whale worked the currents east of Kakul Narrows and the second one was feeding east of Sergius Narrows, close to Deep Bay. No surprise, we frequently spot a lone whale in both locations. Note: Baby Bear pops up frequently in the cruise notes, and with good reason. It's a convenient spot to moor and wait for slack current at Sergius, or to anchor after a late-in-the-day trip through the Narrows. It's also a nice bay, and conveniently located across the channel from great crabbing and bear watching in Deep Bay.

Early Wednesday morning, just minutes after we upped anchor and navigated a careful exit from Baby Bear Bay, I was on the bow for photos of an approaching tug with barge as it cleared the Middle Point channel markers.

It was a still, quiet morning with only a low rumble of boat engines breaking the silence. Surprise! a whale surfaced and spouted noisily right next to the boat. One more blow and then he was gone. It took a few minutes for my racing pulse to slow back to normal. That was a great way to begin a day, but I wish I had captured more than whale spray in a photo. 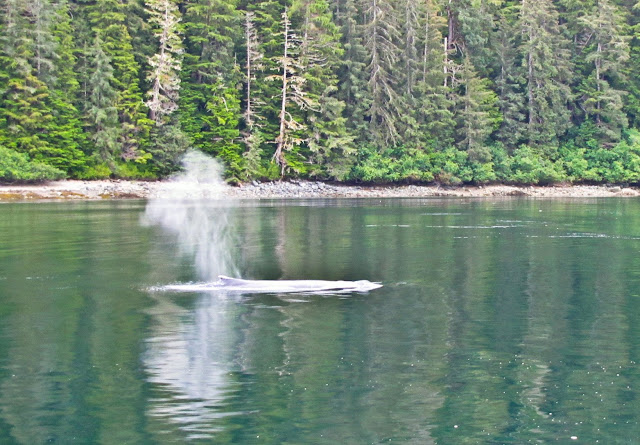 Posted by SeattleDee at 5:26 PM